Ireland ranked second last, only above Poland, in the new study.

Ireland has been blasted for its lack of ambition and progress in fighting climate change in comparison with its European counterparts in a recent in-depth publication by Climate Action Change (CAN) Europe.

The report, which looks into how European countries perform in reaching their climate and energy targets, ranked Ireland 28th, second last, with a score of 21%. 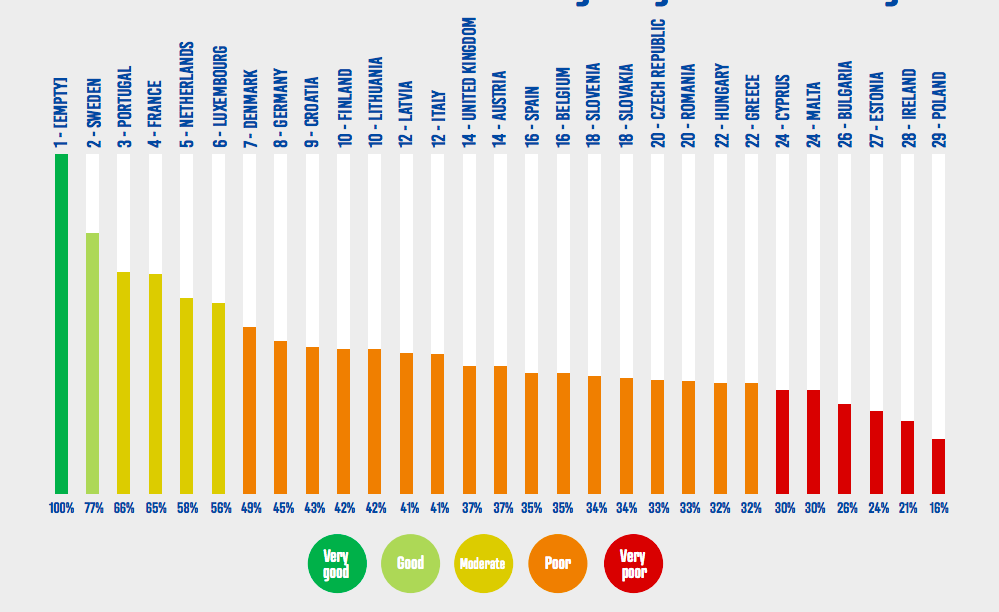 END_OF_DOCUMENT_TOKEN_TO_BE_REPLACED

It criticised the fact that Ireland is set to miss its 2020 climate and renewable energy targets and is also off-course for its unambitious 2030 emissions target.

While it was agreed some years ago that Ireland would deliver a 20% reduction in non-ETS greenhouse gas emissions by 2020 (in comparison to its 2005 levels), it's believed that that number will actually be closer to 5 - 6% – which will result in severe penalties for the country.

END_OF_DOCUMENT_TOKEN_TO_BE_REPLACED

Mentioned also in the publication was the fact that emissions from the transport and agriculture sectors are increasing significantly.

"At EU level, Ireland failed to join the group of progressive EU Member States calling for increased EU climate ambition and played a negative role in the negotiations of the EU 2030 climate and energy legislation, pushing for loopholes to dilute the laws."

Also written up in the report were a series of recommendations for the country on how to cut down on emissions and greatly enhance climate ambition.

CAN Europe's recommendations were:

According to recent surveys, environmental scientists believe that, should climate change continue as its believed to, no fewer than 152,000 weather-related deaths a year will occur between the years 2071 and 2100.

Two years ago, Danny Healy-Rae, the Independent TD from Kerry, immediately began hitting the headlines with his controversial take on climate change.

While in Cabinet, Healy-Rae announced his beliefs on climate change, claiming that "God above is in charge of the weather and we here can’t do anything about it".

The moment occurs here, around the 2.45 mark.

At a more recent debate on Climate Change, Healy-Rae went on to question why Ireland should reduce its carbon emissions for the sake of an "airy fairy" issue, when other nations sit idly by and do nothing.

Adding that Ireland's emissions make up only .13% the global percentage, Healy-Rae stated that he believed more concern should be placed on countries like Japan where they wear surgical masks because "they can't breathe".