Gary Keery was not happy when C4 reporter Symeon Brown questioned him on the prices in his café.

A Belfast born owner of new London café that sells 120 varieties of cereal and 13 types of milk has hit back at Channel 4 reporter Symeon Brown, who questioned him on the prices of his stock.

“Do you think it’s affordable for the area?” asked Brown. 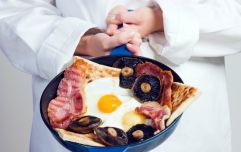 END_OF_DOCUMENT_TOKEN_TO_BE_REPLACED

“I think it’s cheap for the area, really,” responded Keery.

Brown continued: “Do you think local people will be able to afford £3.20 cereal?”

Keery: “If they’re poor, probably not then. Can we stop this interview because I don’t like the questions you’re asking me?” 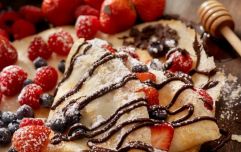 This Irish eatery is giving away free crêpes on Pancake Tuesday

END_OF_DOCUMENT_TOKEN_TO_BE_REPLACED

Following the broadcast of this segment, Keery posted the following open letter on Facebook.

“You obviously don’t understand business if you think I don’t have to put a mark-up on what I sell. It may be the poorest borough in London, but let’s not forget Canary Wharf is also in the borough – but I am the one to blame, eh?” said Keery.

“I still have to pay over-the-top rent for my premises and pay the 12 staff I have employed, so I either have to make a profit or I will be out of business. Maybe if I charged more than £3 for a coffee and dodged all the taxes in this country like some cafes – the reporters would leave me alone, would they? 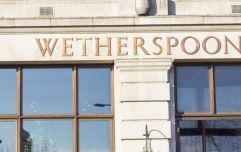 END_OF_DOCUMENT_TOKEN_TO_BE_REPLACED

“If you want someone to solve the poverty crises in London, I don’t think I’m the man to do that as I am too busy trying to cure Ebola and get Kim Kardashian to keep her clothes on,” the open letter added. “Also you didn’t even pay me for the cereal, which you could so easily afford with your overpriced River Island suit, so I will send you a bill for the extortionate £3.20.”

The letter ended: “Yours Sincerely, Gary Keery (the worst person in the world).” 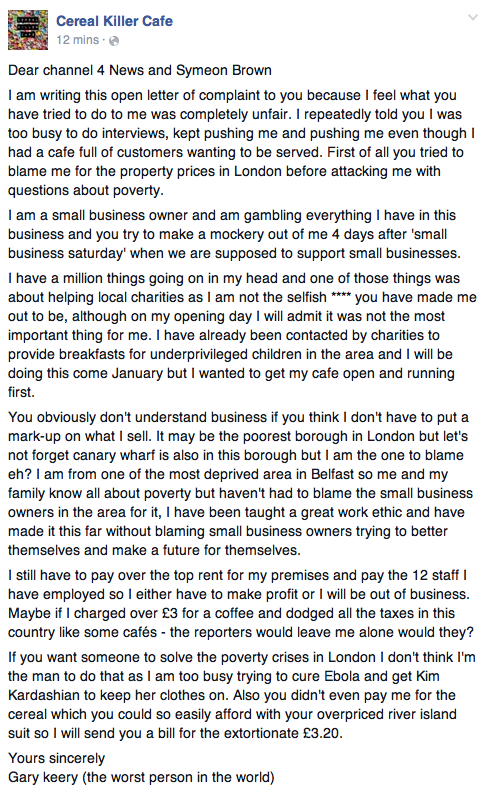 popular
The JOE Friday Pub Quiz: Week 300 - the Triple Century
One of the most underrated sequels of all time is among the movies on TV tonight
Rain and thunderstorm warning extended to include 15 counties
A classic Western is among the movies on TV tonight
Met Éireann gives update on weather warnings for this weekend
An underrated Jason Statham thriller is among the movies on TV tonight
QUIZ: Can you match all 32 counties up to their province?
You may also like
3 years ago
Four brand new burgers are coming to a McDonald’s near you this week
3 years ago
The world's best cocktail bar is coming to Cork for one night only
3 years ago
Fanta Lemon fans rejoice, it's here to stay in Ireland
4 years ago
Donegal nightclub's new 'Bomb in a Bag' drink proves big hit at Donegal rally
4 years ago
Ed Sheeran fans will be able to order take-away while queuing for his gigs in Phoenix Park
4 years ago
Deliveroo are now delivering grub to public parks across Ireland
Next Page