The indictment marks the first official charges brought forward as part of a criminal investigation into Epstein's death.

Two federal workers have been arrested and charged following an investigation into the death of convicted sex offender Jeffrey Epstein.

Epstein, whose death has officially been ruled by a medical examiner as suicide, was discovered in a jail cell in Manhattan, New York on Saturday 10 August.

END_OF_DOCUMENT_TOKEN_TO_BE_REPLACED

It was subsequently reported that on-duty staff failed to carry out routine procedures regarding Epstein, who was not on suicide watch at the time.

That aspect, in addition to the physical nature of Epstein's death, has led to a spate of theories and arguments that the disgraced billionaire financier was murdered.

On Tuesday, the New York Times reported that two federal workers who were on duty on the night that Epstein died have been charged in relation to an alleged failure to check up on him every 30 minutes.

The workers, named by the New York Times as Tova Noel and Michael Thomas, have been charged with making false records and conspiring to defraud the United States of America.

END_OF_DOCUMENT_TOKEN_TO_BE_REPLACED

The report notes that the men "sat at the desk, browsed the internet and moved around the common area" of the jail instead of making their appointed rounds. Furthermore, the workers signed documents stating that they had checked in on inmates despite not doing so.

Their indictment marks the first official charges brought forward as part of a criminal investigation into Epstein's death.

As a result of the 66-year-old's death and thus failure to pursue, all criminal charges against Epstein were dismissed.

On Saturday night, Prince Andrew went before the cameras for a special Newsnight interview, facing questions on his friendship with Epstein as well as accusations by Virginia Roberts Giuffre that Prince Andrew had sexual contact with her while she was being trafficked by Epstein. 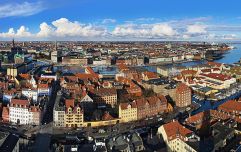 END_OF_DOCUMENT_TOKEN_TO_BE_REPLACED

At one point, the prince described Jeffrey Epstein's behaviour as "unbecoming," prompting journalist Emily Maitlis to cut across him and say:

"Unbecoming? He was a sex offender."

Prince Andrew explained his choice of words by saying that he was being "polite."

popular
Bus Éireann’s service from Dublin to London will restart this week
A star-studded crime thriller is among the movies on TV tonight
Gardaí unveil new Armed Support Unit vehicles to replace older models
Gardaí are going global with new roles created in UAE and Bangkok
The full list of cancelled flights in and out of Dublin Airport on Monday (so far)
An action-packed thriller is among the movies on TV tonight
Amazon Prime Video has just added 51 big movies to its library
You may also like
5 hours ago
WATCH: Protester interrupts Good Morning Britain with 'Bye Bye Boris' song
1 week ago
Airline to launch world-first economy bunk beds for long-haul flights
1 week ago
Cancer campaigner Deborah James passes away aged 40
1 week ago
At least 46 people found dead in abandoned lorry in Texas
1 week ago
Kendrick Lamar closes Glastonbury with blood-soaked plea for women's rights
1 week ago
Oslo Pride events cancelled after two killed in Norway shooting
Next Page