On Tuesday Vera Twomey will walk or be wheeled into Dublin depending on how her legs hold up. It will be her 9th day of walking, completing a 272-kilometre pilgrimage from Cork to the Capital.

Hoping to arrive on Tuesday, Vera’s intention is to stand outside the gates of Leinster House and demand that the Minister for Health Simon Harris approve her application for medicinal cannabis for her daughter Ava. She will have walked from Cork, while suffering from tonsillitis and legs that were banjaxed on the third day of her journey.

She is a woman with a steel rod of determination running through her, but that rod is cemented by fear. 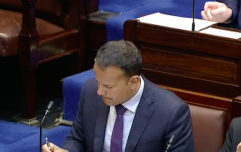 END_OF_DOCUMENT_TOKEN_TO_BE_REPLACED

The same fear was in the voice of every mother and father that I spoke to as I walked with Vera for 22km on Sunday from Abbeyleix to Monasterevin. It is the paralysing fear of a child dying, knowing that there was something you could have done to save them.

Vera’s daughter, Ava, suffers from Dravet syndrome, a drug resistant kind of epilepsy that means she has seizures every day. Her family live in the knowledge that she could have a heart attack induced by a seizure at any moment and she could die. In February Vera released footage of her daughter having a seizure to TV3 news, it is distressing to watch.

Medicinal cannabis campaigner Vera Twomey says she had no choice but to release heart-breaking video of her daughter pic.twitter.com/OCsdqCTqQ9

Vera Twomey believes that there is a drug that can help her daughter and it is for this reason she is walking from her door to the gates of the government.  The drug is medicinal cannabis and despite the publication of a HPRA report earlier this month which recommended that medicinal cannabis be available for certain patients, Vera has not yet been able to procure the medication for her daughter.

Until late last year Ava was having up to 80 seizures a day. In October, however,  The Hemp Company on Capel Street in Dublin sent Vera and her husband Paul a bottle of Charlotte’s Web, a type of cannabis oil for their daughter. 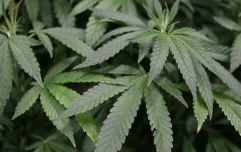 END_OF_DOCUMENT_TOKEN_TO_BE_REPLACED

After beginning to take the cannabis oil, Ava’s seizures were reduced by 80%. Vera said the progress Ava has made was sensational.

"My daughter has started speaking, before October she wasn't speaking at all."

Ava's health and wellbeing Vera said, "has changed beyond belief, her teachers are blown away. Her doctors never thought she would make any improvement".

But Ava’s progress has slowed and the changes that Vera witnessed in her daughter have begun to reverse. The words she was learning are being forgotten with each debilitating seizure and she still has up to 30 seizures every day.

Charlotte’s Web, the cannabis oil Ava is currently taking, contains CHB, a component of the cannabis plant which is aiding Ava. What Vera is campaigning for however is medicinal cannabis containing both CHB and THC. 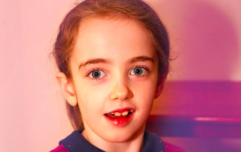 END_OF_DOCUMENT_TOKEN_TO_BE_REPLACED

THC is the psychoactive component of cannabis. It is the part that can make you high. What Vera Twomey is looking for is an oil with 1-2% THC, an amount that she believes would have no psychoactive effect on her daughter but would greatly enhance the effect of the medicine. THC and CHB reportedly work to complement each other’s medicinal effectiveness.

There have been several false starts for Vera and her family. Their application for a special dispensation to the drug through the Compassionate Access Scheme - the scheme that the government announced as a way for people to access medicinal cannabis - has not been refused but Vera was told it was not being accepted.

The Twomeys feel they have exhausted every avenue with the government.

"Every step along the way they have thrown a new hurdle in our way, they keep changing the rules every time we follow them," says Vera.

At present because medicinal cannabis is an unlicensed drug in Ireland, medical practitioners are unable to prescribe it. 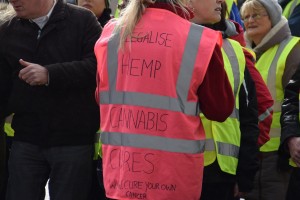 One of the problems with this medicine is that it is not a universal dosage like aspirin. The balance of THC must be correct to each individual’s condition and calculated according to body weight.

So far in the Republic one child has been granted a licence to use medicinal cannabis oil containing THC. Tristan Calahane, whose parents travelled to Colorado for him to be treated with the medicine there, was given a licence following his return.

It is the fear that it will be too late by the time the government grants her access to the medicine which is driving Vera to walk beyond the realms of banner protests and petitions.

Vera’s supporters, of which there were many, were pragmatic as they walked along the Laois roadside.

"If she chains herself to the gates of the Dáil they can cut her off, and if she goes on hunger strike people will turn on her for being selfish. So this has to work," said Lindsay, the third person to mention hunger strike in the space of five miles.

Protesting is having a political moment across the world right now, but Vera’s walk is personal. Through towns which have been bypassed by the motorway, where the old pubs are boarded and the houses hidden, people are coming out to support Vera.

They are cheering and honking, and if not all of them are entirely sure about the specifics of what she is after, all believe that she has the best intentions for her daughter in her heart and in her feet. 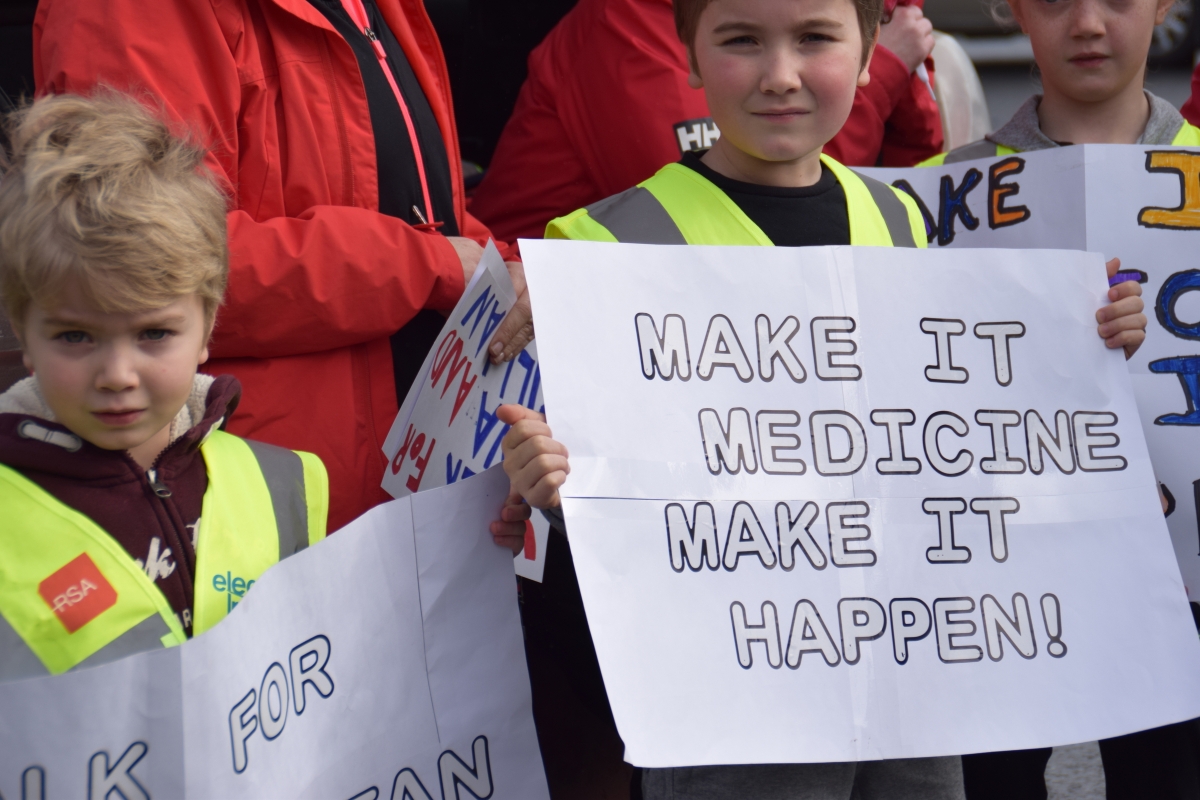 Supporters line the road for Vera and Ava

In pubs and shops and hotels, Vera has found support and this was the thing that struck me, the level of devotion of Irish people to a child and a cause that doesn’t have to be theirs but is indeed one of their own.

Tea and buns were on offer in a petrol station in Ballybrittas, coffee and lunch in Gandons of Cappakeel; generous hospitality characterised the whole day. 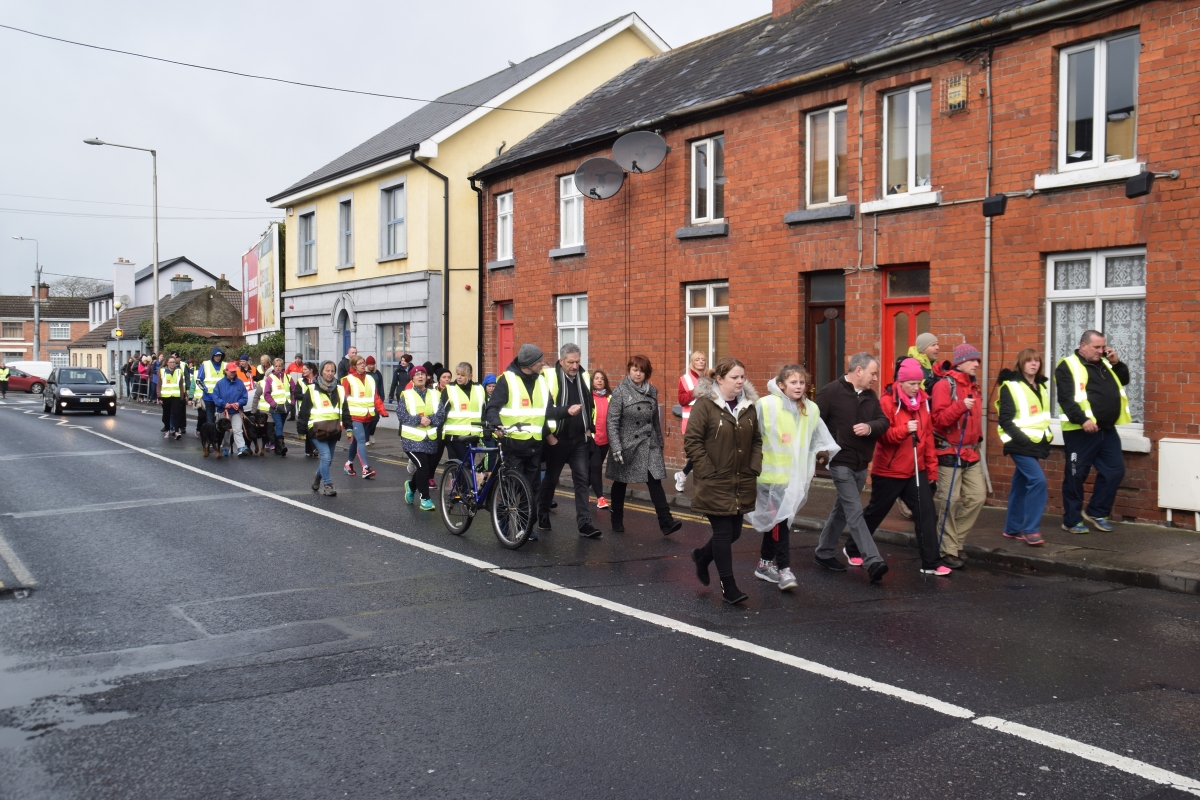 While social media is often maligned as disconnecting people from one another, in this instance it connected a mother from Cork with the old roads and people living along them. Almost everyone had found Vera or she’d found them through Facebook. Her story spread organically online to become something people could rally behind and so they are coming in droves to support her and her family.

"She is representative of all of us," said Diana, a woman from Portlaoise who was walking with Vera. "Women have always just accepted what has been given to them. Vera is fighting for us."

As Vera Twomey arrived into Monasterevin on crutches after a gruelling six hours on the road with her children around her and 100 or more people walking behind her, a voice behind me said, "now that is the money shot". It was Brian Mahoney, the man who had pushed an empty wheelchair for over 20 kilometres from Portlaoise just in case Vera needed it.

He was being cynical but also aware that Vera Twomey, a woman crippled with the hardship of the road, made an emotive picture. I lowered my camera and acknowledged that he was indeed correct, a limping mother carried by the love of her children and community did indeed make a great story.

#Veratwomey arriving into Monesterevin yesterday after a gruelling 6 hours on the road. Sun and supporters on her back. #walkforava pic.twitter.com/WPwL6hdd92

“This has to be the most embarrassing thing for a politician. A sick mother walking from Cork to Dublin for her very sick child,” said Brian. A cynic yes, but one who is in awe of Vera, "I’m actually a little scared of her, she is so fierce. It’s like getting between a bear and her cubs."

Brian’s five-year-old son Cillian also has drug-resistant epilepsy and when he heard Vera was doing the walk, he took a week’s annual leave so he could walk the way with her. “This is no road to walk alone,” he says. "Maybe this cannabis oil with THC could help my son too, maybe not, but what Vera is doing is so important. She is fighting for her child and I have to be here for that."

Information regarding Vera's walk to through Dublin is below. She hopes to reach the Dáil by 1.30pm on Tuesday. 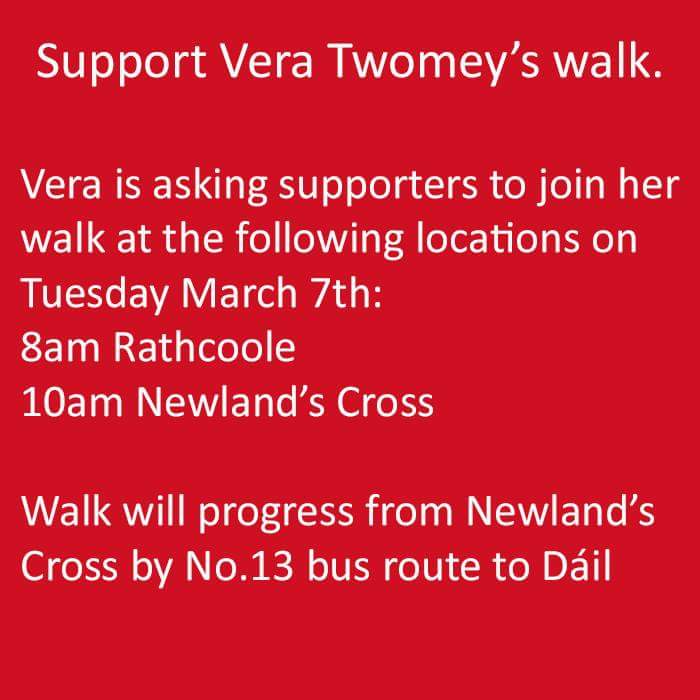 popular
Micheál Martin urges young people to get vaccinated as 87% of cases today were in people aged under 45
The full list of all the new shows and movies coming to Netflix in August
Home and Away star Dieter Brummer found dead at 45
Gardaí examining social media threats against President Michael D Higgins
The 50 most iconic songs of all time* have been revealed
The 10 must-watch new (and old) arrivals on Disney+ this August
QUIZ: Ignite your brain cells with this testing general knowledge quiz
You may also like
4 years ago
LISTEN: Ireland could be the next cannabis growing capital of the world
4 years ago
A Cork mother is campaigning for medicinal cannabis for her 6 year old daughter and needs your help
2 days ago
Restaurants chief says "fake bookings" being made in protest of indoor hospitality rules is "a huge issue"
2 days ago
Garda patrol car struck by gun shot in Tallaght overnight
2 days ago
Draft guidelines published for the return of indoor hospitality on Monday
3 days ago
Man in 60s dies at Dollymount Strand as number of swimming-related deaths this week rises to six
Next Page