WATCH: History is made as Kim Jong-un crosses into South Korea to meet President Moon Jae-in

A moment 65 years in the making.

History was made on Friday when Kim Jong-un became the first North Korean leader to cross into South Korea since the end of the Korean War in 1953, 65 years ago.

At approximately 9.30am on Friday morning, Kim Jong-un met South Korean President Moon Jae-in at the Military Demarcation Line dividing the two countries in the village of Panmunjom, also known as The Truce Village.

The pair shook hands and smiled upon meeting each other at the Demilitarized zone, with Moon Jae-in also joining hands with Kim Jong-un while briefly stepping foot in North Korea before they began their first round of negotiations. 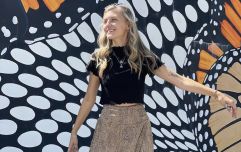 END_OF_DOCUMENT_TOKEN_TO_BE_REPLACED

Amongst the items up for discussion was denuclearisation, with Kim Jong-un reaffirming his promise to stop North Korean nuclear missile tests and expressing a desire for peace and for future meetings between the two nations.

Moon Jae-in said that “a very good discussion” took place during the first round of discussions, with a joint statement set to be released at the end of the day after the two leaders plant a tree together in a symbolic gesture and engage in a second round of negotiations.

The historic meeting comes a little over a month after it was confirmed that US President Donald Trump will meet with Kim Jong-un as early as next month in an effort to achieve permanent North Korean denuclearisation.

The Big Reviewski || JOE · The Big Reviewski with Y: The Last Man, that Malignant ending & a secret streaming service
popular
Jobs of an Irish stay-at-home parent calculated to be worth just under €50,000 per year
Government announces special €1,860 payment for laid-off workers during pandemic
Body of woman found by walker on shoreline in Galway town
One of the most-anticipated movies of the last few years is finally available to watch at home this week
Gabby Petito disappearance: FBI confirm remains found are that of missing woman
Michael Gandolfini on playing the young Tony Soprano in the new Sopranos prequel movie
"One person's rent is another person's income" – Varadkar rejects calls for three-year rent freeze
You may also like
4 hours ago
President Biden warns trade deal must not derail peace in Northern Ireland
21 hours ago
Men arrested trying to cross New Zealand border with boot full of KFC
1 day ago
The US travel ban looks set to be lifted for vaccinated EU passengers
3 days ago
Liam Gallagher reveals facial injuries and claims he "fell out" of a helicopter
6 days ago
Nicki Minaj's Covid vaccine swollen testicles claim "false", says Trinidad and Tobago
1 week ago
Comedian Norm Macdonald dies aged 61 after battle with cancer
Next Page