What are the chances of this?

Labour are struggling badly to hold onto their seats this weekend, and one of their last hopes is the party's Deputy Leader Alan Kelly who is slogging it out in Tipperary South.

His challenger for the constituency's final seat is incumbent Fine Gael TD Tom Hayes, and the two are so close after six rounds of counting that there is not a single vote between them. Not one. 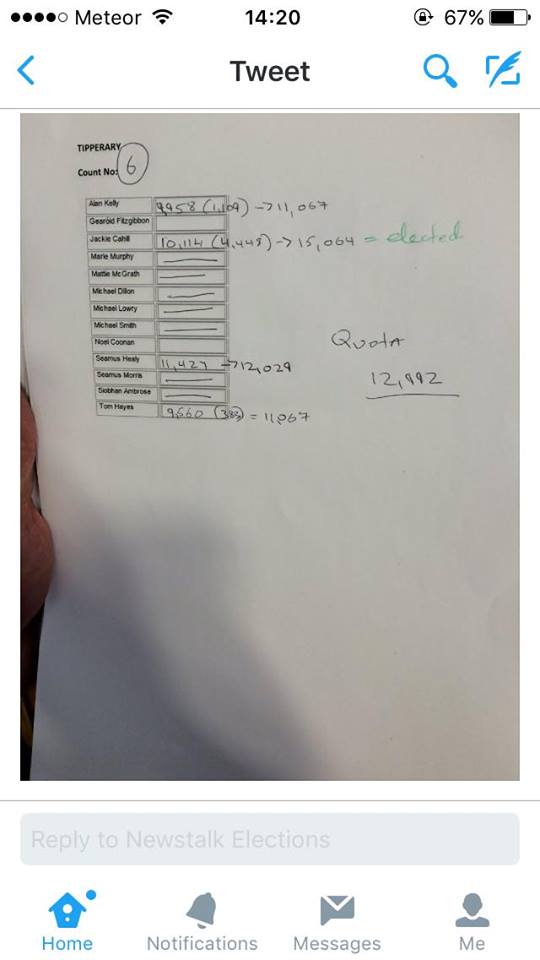 The talk on Twitter is that the Labour man will keep his seat, but for the two men to be on the same amount of votes after six counts is surely a first.

popular
Met Éireann issues weather warning for three counties
QUIZ: Take your very best shot in this tough General Knowledge Quiz
QUIZ: Can you conquer this delightfully difficult General Knowledge Quiz?
The JOE Movie Quiz: Week 160
A feel-good comedy with a Springsteen soundtrack is among the movies on TV
QUIZ: Can you name the video game from the lead character?
New horror movie trailer has one of the best jump scares in years
You may also like
1 month ago
Limerick hurler arrested following alleged altercation with Tipperary player in Limerick pub
1 month ago
ISPCA rescue three dogs living amongst raw meat in Tipperary
1 month ago
Takeaway operator imprisoned for three months following food safety breaches
1 month ago
Landlord filmed assaulting and threatening to kill a tenant in Tipperary
2 months ago
Eight men charged with serious assault on a man in Tipperary
2 months ago
Ireland's first motorway average speed camera system to begin operating today
Next Page