"To me it seems like they kind of don't want us to make a fuss."

Politicians and students have raised concerns about "school profiling" and the fairness of this year's Leaving Cert results, which will rely on a system of calculated grades.

The class of 2020’s Leaving Cert results will be issued to students on September 7th. These calculated grades will be a combination of predicted grades from teachers and a national standardisation process. Similar results in England, Wales, Scotland and Northern Ireland were scrapped after a large cohort of students were downgraded from their original teacher estimates. 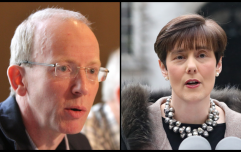 END_OF_DOCUMENT_TOKEN_TO_BE_REPLACED

Pressure is now building from opposition politicians and students here for the Department to publish the model being used, and a petition to “scrap school profiling”, where a school’s past results can affect the current students’ predicted grades, has garnered over 2,000 signatures.

Social Democrats TD and party Spokesperson for Education Gary Gannon said that as long as this school profiling exists, the calculated grades will not be just;

Aidan Cusack, a Leaving Cert 2020 student himself, set up the petition to scrap school profiling, and says students feel they have been left in the dark;

"To me it seems like they kind of don't want us to make a fuss, that they're kind of not giving us all the information so we won't know until we're affected the same as the UK."

You can watch the full video below:

"The results that this cohort of Leaving Cert students are getting probably won't be fair, and they won't be legitimate because there'll be too many factors at play here."@noschoolprofile and @1GaryGannon spoke to @RobOHanrahan about problems with the 2020 Leaving Cert results. pic.twitter.com/E673MJQaqz

popular
QUIZ: Can you name every county in Ireland containing the letter 'O'?
The JOE Music Quiz: Week 105
The JOE Friday Pub Quiz: Week 295
Three people injured after two-car crash in Dublin
An exciting Predator prequel and 6 more big trailers you might have missed this week
Morgan Freeman has been banned from entering Russia
Late Late Viewers left in awe of Paul McGrath's memories of Jack Charlton
You may also like
4 months ago
State exams this year "cannot go ahead as planned", says students' union
8 months ago
State Exam Commission apologises to 144 LCA students impacted by error
8 months ago
Significant rise in points for most courses as CAO offers released
8 months ago
Always thought you could have done better at Leaving Cert maths? This is the challenge for you
8 months ago
Leaving Cert students hailed for "great resilience" as results go live
11 months ago
Leaving Cert exams begin today for 55,000 students across Ireland
Next Page