LEON will open its doors to the Irish public in May.

LEON, a popular restaurant known around the world for its healthy take on fast food, has announced that it will be bringing its famous "Naturally Fast Food" brand to Dublin later this year.

The multiple award-winning restaurant group has 63 restaurants worldwide will open an outlet in Temple Bar in May and a second outlet in Dundrum Town Centre later in the year. 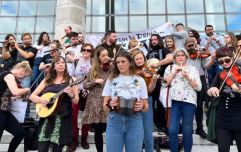 Large turnout in Dublin for protest over planned hotels

END_OF_DOCUMENT_TOKEN_TO_BE_REPLACED

Washington DC, Utrecht, Amsterdam and Oslo are just some of the locations the restaurant already operates out of, with the Dublin branch to be located on Crown Alley in what was formerly Eager Beaver.

The company behind LEON plans to open 20 restaurants nationwide by 2023, with intentions to create 600 new jobs across the service industry as it shares its approach to fast food with its launch into Ireland.

Speaking about the Temple Bar opening, Managing Director of LEON Ireland, Stuart Fitzgerald, said: "We are absolutely delighted to finally reveal that Ireland’s first LEON will be located at the former Eager Beaver shop in Temple Bar.

"Temple Bar is a melting pot of culture, creativity and individuality which makes it the perfect setting for LEON’s Irish launch. We are very proud to be able to say we will be making such a positive impact on the Irish economy over the next five years with the creation of 600 jobs and using so many Irish suppliers in our various locations across the country. We are so excited to be bringing a unique brand like LEON to Ireland."

popular
RTÉ tries to solve Michael Collins murder in new documentary
QUIZ: Can you get top marks in this short but tricky Irish geography quiz?
4-year-old girl killed in Sligo caravan park named as Alice Dunleavy
Two long-thought-dead Marvel projects appear to be in the works
QUIZ: Can you score 12/15 in this difficult General Knowledge Quiz?
QUIZ: Test your skills to the limit with this General Knowledge Quiz
QUIZ: Can you name all the counties in Ireland with an ‘N’ in their name?
You may also like
10 months ago
Outrage over Temple Bar hotel development as petition to save Merchants Arch hits 14,000 signatures
1 year ago
Protestors call on Temple Bar pub to "come out and say sorry" over alleged assault
1 year ago
19 people arrested as Gardaí disperse crowds in Dublin City Centre
1 year ago
Three arrests made after large crowds gathered in Temple Bar on Saturday night
1 year ago
Eamon Ryan says plan for 3,000-person outdoor dining area in Temple Bar "does make sense"
2 years ago
All pubs and nightclubs in Temple Bar to close with immediate effect
Next Page