The story was reported by the Limerick Leader on Tuesday afternoon.

A Moroccan national resident in Limerick is being questioned by Gardaí after the discovery of documents believed to be in the name of Rachid Redouane. 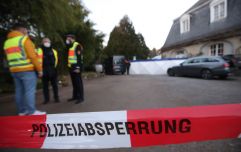 END_OF_DOCUMENT_TOKEN_TO_BE_REPLACED

Redouane is one of three men identified as being responsible for the attack in London in which seven people were killed and a further 48 were injured on Saturday night.

According to the Limerick Leader, the Moroccan national was arrested in Limerick on Monday night on foot of information received from the UK police.

Gardaí conducted a search of his property following the arrest and are believed to have found documents in the name of Redouane, who lived for a period in Rathmines in Dublin and was married in Ireland.

Sources told the Limerick Leader that the man has been living and working in Limerick for some time and that he may have lived elsewhere in Ireland prior to moving there.

It is not believed that the Moroccan national – who is being questioned by detectives attached to the Garda National Immigration Bureau (GNIB) – has been radicalised, but Gardaí are seeking to find out how he came to be in possession of the documents.

You can read more on the story on the Limerick Leader website here.

UPDATE: Gardaí say that a man who had been arrested for offences under the Theft & Fraud Offences Act has subsequently been released without charge.

popular
Amazon Prime Video has just added 16 big movies to its library
QUIZ: We bet you can't get full marks in this extremely frustrating geography quiz
"It will be with me until I die" - Charlie Bird opens up about "loveliest gesture" from Daniel O'Donnell
QUIZ: Try score top marks in the hardest country flag quiz you'll ever take
One person killed and three wounded in lecture hall shooting in Heidelberg
Ireland tells Russia that naval exercises off Irish coast are "not welcome"
One of the best action movies of recent years is finally available to watch at home
You may also like
17 hours ago
Two men in their 20s arrested after car discovered on fire in Carlow
18 hours ago
A new law now prevents employers using tips to ‘make up’ rates of pay on contracts
18 hours ago
Ireland likely to be hit with "more Covid variants" over next few months
20 hours ago
Ireland tells Russia that naval exercises off Irish coast are "not welcome"
23 hours ago
Man dies after being swept out to sea off Clare coast
1 day ago
Gardaí appealing for witnesses in relation to alleged assaults in Sligo
Next Page