Lotus’s unbelievable tweet about Kimi Raikkonen heading back to Ferrari

We wish more sports teams were this honest about their feelings.

Away from the goings on at the FAI today, the big news on the world of F1 is that Kimi Raikkonen is heading back to Ferrari to replace Felipe Massa, who said he was leaving at the end of the season yesterday.

Raikkonen left the Italian team in 2009, heading into the world of rallying and NASCAR before returning to F1 with Lotus in 2012. 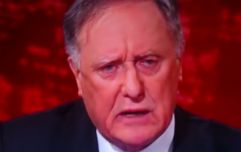 END_OF_DOCUMENT_TOKEN_TO_BE_REPLACED

The Finn had a very good first season with Lotus, finishing third in the standings but this season has been less successful, with rumours floating about of a deteriorating relationship between the driver and team bosses, with money for a new contract alleged to be the cause.

All those rumours ended today when Ferrari announced they were taking back the Finn, who won his solitary world crown in the famous red car in 2007.

"Scuderia Ferrari announces that it has reached an agreement with Kimi Raikkonen. The Finn will join Fernando Alonso in the driver line-up for the next two racing seasons."

However, his Lotus team are not too pleased, tweeting this incredible image in the last hour.

So #Kimi is off to #Ferrari for 2014; it hurts a little bit… #F1 #Raikkonen pic.twitter.com/HkFhWvqpTo

We really don't know exactly what it means, but it might be the maddest tweet ever sent out by a professional sports team.

popular
5 years ago, Hollywood took a massive gamble on a huge sequel... and lost big time
Netflix has just added 12 very big movies to their library
One of the most underrated crime thrillers of recent years is among the movies on TV tonight
Mystery over 'dead husband' spotted in Indian restaurant has been solved
The JOE Friday Pub Quiz: Week 332
QUIZ: JOE's Big News Of The Day Quiz #40
Netflix backtracks on anti-password sharing measures following user outcry
You may also like
8 years ago
Pic: Brian O'Driscoll's first piece of advice for his new son Billy is spot on
8 years ago
Pic: Nicklas Bendtner puts Gary Lineker back in his box with great response to Twitter slagging
8 years ago
Vine: Cian Healy recalls the time he bulldozed Richie McCaw in a very appropriate response to a Conor McGregor tweet
8 years ago
We shouldn’t be getting a kick out of Michael Owen’s miserable travel experiences this morning, but we are
8 years ago
Pic: Eoin Liston’s picture of the 1981 Kerry team on holiday is something else
8 years ago
40 years on from 'Rumble in the Jungle' George Foreman has this brilliant message for Muhammad Ali
Next Page