The extension will cut the journey time to the city centre by just under 15 minutes during rush hour.

Four new stops are set to be added to the Luas green line on a route that will see the line extended from Broombridge to Charlestown via Finglas in north Dublin.

END_OF_DOCUMENT_TOKEN_TO_BE_REPLACED

The proposed route will create a public transport connection between the communities of Charlestown, Finglas Village, Finglas west, St Helena’s and Tolka Valley and the city centre.

Luas Finglas will be comparable to higher speed sections of the Luas network and it is predicted that the extension will cut the journey time from Charlestown to Trinity College from approximately 44 minutes to 30 minutes during morning rush hour.

An emerging preferred route has been developed by The National Transport Authority and Transport Infrastructure Ireland and comments from all stakeholders and members of the public on the route are invited via luasfinglas.ie, where all details of the route are available. 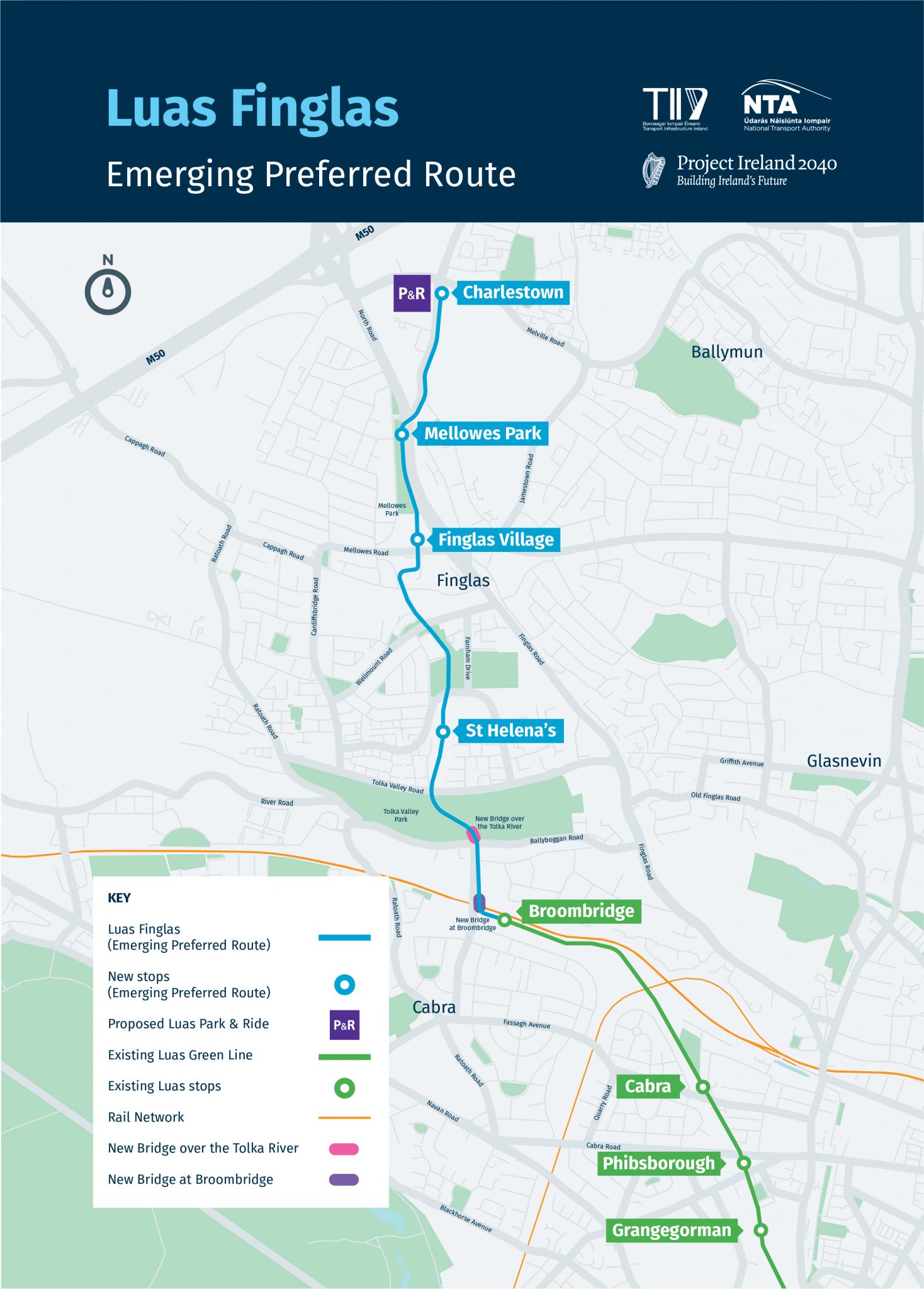 On Tuesday morning, Minister Ryan also welcomed the first of eight new 55 metre Luas trams into service, with the new larger trams set to increase Luas capacity on some of the network’s busiest sections.

END_OF_DOCUMENT_TOKEN_TO_BE_REPLACED

Seven more 55 metre trams, each of which will carry approximately 100 more passengers than existing 44 metre trams, will be delivered in the coming months and will be in passenger service by early next year.

By 2021, there is set to be 81 Luas trams in service, 41 of which will be 55 metres long. All in all, the addition of the new trams and conversion of existing trams will increase capacity on the busiest sections of the Luas network by almost 30%.

Commenting at the Luas Broombridge Depot on Tuesday morning, Minister Ryan said: “I am delighted to announce this consultation on the Emerging Preferred Route for Luas Finglas. I encourage the public and stakeholders to take part in this public consultation so we can deliver a major public transport improvement to Finglas and north Dublin.

“I’m also very pleased to see the first of eight new 55 metre Luas trams going into passenger service and to see that half of the 44 metre trams have now being extended. I am also pleased there will be a pedestrian and cycling path along most of the route.

“The government is committed to improving sustainable public transport. I look forward to the Luas network and fleet growing in the coming months and years.”

The Big Reviewski || JOE · Wonder Woman 1984 star Kristen Wiig & director Patty Jenkins on comedy, Cats & handsome Irishmen
popular
The JOE Friday Pub Quiz: Week 226
QUIZ: Can you pass your driving test and guess the meaning of all these road signs?
50 more people with Covid-19 have died, 3,498 new cases
Netflix announces new true crime documentary about terrifying LA hotel
Irish punters could turn €0.98 into hundreds of millions* with a bet on the Super Jackpot
Gardaí appeal to the public to stay at home this weekend
Recall of Pedigree dog food over safety concerns
You may also like
8 hours ago
Covid-19 hospital cases continue to rise despite some "hopeful trends"
9 hours ago
Church and State "bear heavy responsibility" over Mother and Baby Homes, says President
10 hours ago
Josepha Madigan apologises for "insensitive" comment about "normal children"
1 day ago
28 more people with Covid-19 have died, 3,955 new cases
1 day ago
Gardaí fine three people for driving 80km to get a takeaway during Covid restrictions
2 days ago
Nurses union calls for "National Emergency" to be declared
Next Page