You won't want to miss this.

A partial eclipse of the moon is set to be visible from Ireland on Tuesday evening.

The eclipse is due to start as the moon rises in Ireland – just before 10pm - and Astronomy Ireland are inviting members of the public down to their headquarters to witness the event.

END_OF_DOCUMENT_TOKEN_TO_BE_REPLACED

Nearly two thirds of the moon will go inside Earth's shadow from just before 10pm until midnight, Astronomy Ireland say and through the use of their powerful telescopes, craters on the moon, as well as the mountains inside the craters, will also be visible.

Tonight's event has been described as quite a 'deep' eclipse, and one not to be missed.

The event will begin at 9:30pm at Astronomy Ireland Headquarters in Blanchardstown on Tuesday night, lasting until midnight.

It is an all ages event, and completely free, so if you're in any way interested, you should head along. 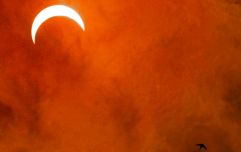 Partial solar eclipse to be visible all over Ireland tomorrow

END_OF_DOCUMENT_TOKEN_TO_BE_REPLACED

The eclipse is due to take place just days before the 50-year anniversary of the Moon Landing, and there will also be a talk from David Moore on how lunar eclipses in the past affected the civilisation we have today.

More information is available on the Astronomy Ireland website here.

popular
Met Éireann updates weather warning for entire country as temperatures set to fall to -6
Céline Dion diagnosed with incurable neurological disease
The "eighth best movie ever made" is among the movies on TV tonight
Jennifer Lawrence sparks controversy by saying she was the first woman to lead an action movie
Shane MacGowan's wife shares update after singer is hospitalised
5 deadly destinations for a last-minute city break this winter
15 years ago, one of the greatest scenes of the 21st century arrived in cinemas
You may also like
1 year ago
Meteor shower to be visible tonight as Halley's Comet passes over Ireland
2 years ago
Rare "blue moon" will be visible over Ireland on Halloween night
2 years ago
NASA confirms the presence of water on the moon
2 years ago
"Best meteor shower of the year" to be visible from Ireland tonight
2 years ago
NASA scientists to attend astronomy festival in Galway this weekend
3 years ago
A rare astronomical event will be visible in the skies above Ireland today
Next Page