The majority of people in England are either 'pleased' or 'not bothered' about the prospect of Irish unification, according to a new poll.

57 per cent of those polled say the concept of a united Ireland would leave them feeling 'pleased' or 'not bothered'.

Specifically, 20 per cent of English people say they would be 'pleased' to see a united Ireland, while 37 per cent say they are 'not bothered' by the prospect. Just 31 per cent of people in England would feel 'upset' if Ireland was to unify.

Best bit about this: 57% of people in England are either ‘pleased’ or ‘not bothered’ about Irish unification.

The poll was commissioned by The Times and conducted by YouGov in England and Wales, LucidTalk in Northern Ireland and Panelbase in Scotland.

Data also showed a majority of people in Northern Ireland and Scotland support referendums on issues of Irish unification and Scottish independence.

The situation in Wales is slightly different, however. 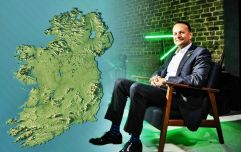 Leo Varadkar has a very clear vision for a United Ireland

END_OF_DOCUMENT_TOKEN_TO_BE_REPLACED

Just 23 per cent of Welsh people support independence, with 52 per cent saying they are opposed to the idea of leaving the UK altogether.

On the issue of Scottish independence, the majority of voters across the UK believe Scotland will go it alone within the next decade.

60 per cent of Northern Irish people think Scottish independence is going to occur within the next 10 years, while 49% of people in England, Scotland and Wales agree.

These results will place the future of the United Kingdom under greater scrutiny, but politicians in Northern Ireland understandably disagree.

DUP leader Arlene Foster told Sky News "we all know how divisive a border poll would be", while her Sinn Fein's Michelle O'Neill said "There is an unstoppable conversation underway on our constitutional future".

There is an unstoppable conversation underway on our constitutional future

It is time for the Irish Government to step up preparations

popular
Varadkar felt "very bad" for missing Irish reopening dates
Eoghan McDermott to leave RTÉ after six years (Report)
QUIZ: Can you answer all the £1 million questions from Who Wants to be a Millionaire?
Impact of vaccination on healthcare workers "phenomenal"
Someone in Ireland is €500,000 richer following Tuesday's EuroMillions draw
BBC reveals Season 6 of Line of Duty is coming later this month
Sony are giving away a free game to all PS4 and PS5 owners
You may also like
1 year ago
A united Ireland would be a "different state", says Leo Varadkar
2 years ago
Sinn Féin TD tells Dáil a united Ireland is the way forward
2 years ago
University of Oxford debating society slammed for hosting debate on Irish reunification
2 years ago
Two in five Northern Irish people would welcome united Ireland, new survey finds
2 years ago
New York mayor declares 17 March as "Gerry Adams Day" in New York City
4 years ago
Debate around Irish unification needs to be "deShinnerised" according to expert
Next Page