Political ideology will always be a divisive topic and while some people might disagree with another person's opinions and beliefs, this debate is usually grounded in some semblance of truth and reality.

While the centenary celebrations for the 1916 Rising garnered some wonderful tributes and rhetoric, an article in The Telegraph has attempted to compare the Irish rebels of a century ago with the terrorist actions of groups like ISIS and Al-Qaeda.

END_OF_DOCUMENT_TOKEN_TO_BE_REPLACED

We're not going to link back to it but it's not difficult to track down the article in question and it has performed its sole purpose of inciting fury, ire and disgust.

Here's some of the extracts from the article in question:

"One hundred years ago this Monday was the last occasion when a then-British city was taken over by armed fanatics bent on inflicting bloody carnage in the name of a political ideology with quasi-religious overtones".

END_OF_DOCUMENT_TOKEN_TO_BE_REPLACED

"Far from the traitors who had stabbed Irish boys serving with the British Army on the western front in the back, the Easter rebels were transformed into heroes and patriots".

"Just as official Brussels turned a blind eye to the entry of trained and dedicated terrorists through their wide open borders, so the British officials ruling Ireland permitted the training and military drilling of the rebels for fear of offending Irish national sensibilities".

It goes without saying that plenty of people were quick to express their disgust at the article. 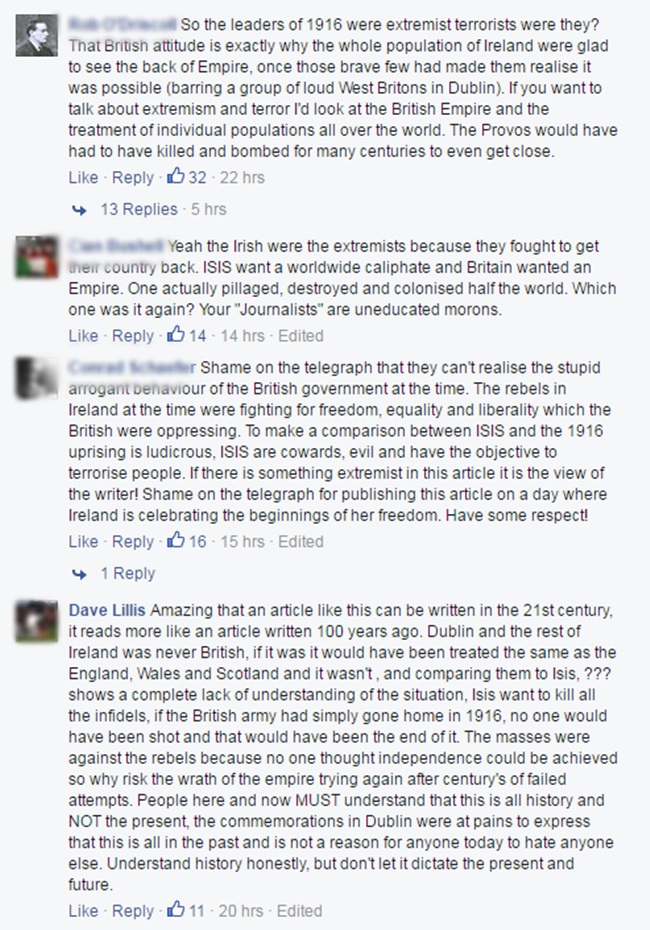 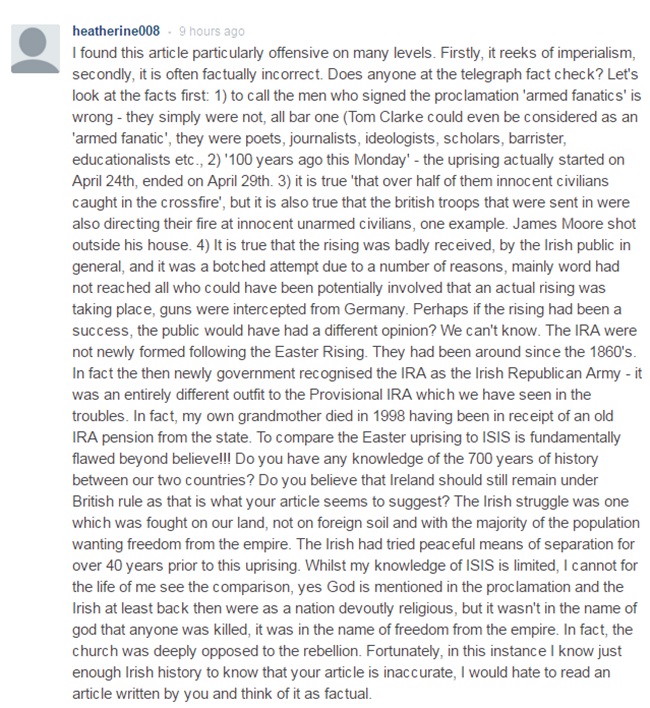 popular
Jordan Peterson suspended from Twitter over Elliot Page comment, says he won't apologise
The JOE Friday Pub Quiz: Week 301
County where winning Lotto jackpot ticket worth over €5.5 million was sold confirmed
Parent's Benefit Leave in Ireland is being extended from today - here's what you need to know
The full list of cancelled flights in and out of Dublin Airport on Friday (so far)
One of the best sports movies of recent years is now available to stream at home
Netflix reveals full line-up of new shows and movies arriving in July
You may also like
1 month ago
Ireland's first ever "Bar Manager Apprenticeship Degree" to launch this week
2 months ago
WATCH: Chaos unfolds in Israeli airport when a US family tried to bring bombshell back home
2 months ago
Man arrested after a woman is fatally stabbed in Antrim
5 months ago
Spotify to pull Neil Young music after he slammed Joe Rogan podcast
5 months ago
The world's first orbiting film studio is scheduled to be launched into space in 2024
6 months ago
20,554 new cases of Covid-19 confirmed across Ireland
Next Page