The group has called for a starting date for all live events no later than October.

Give Us The Night, a group representing workers in the nightlife industry, has said a reopening plan from the Government for the sector is "long overdue".

The comments come as the sector has been closed for nearly a year and a half due to Covid-19 restrictions, with the group stating that the nightlife industry is "now the only remaining one without any date for return".

END_OF_DOCUMENT_TOKEN_TO_BE_REPLACED

In a letter to Taoiseach Micheál Martin, Tánaiste Leo Varadkar and Arts Minister Catherine Martin, Give Us The Night founder Sunil Sharpe described the Government’s response to reopening the sector as "inadequate, inflexible and lacking a basic understanding of how the industry works".

"Ireland, despite its high rate of vaccine uptake, is the only European country that has made no concrete plans for the return of its events industry and venues," the letter reads.

"In the Government's 'The Path Ahead' document (published 29 April), it states that 'high-risk activities' such as bars, restaurants, nightclubs and mass gatherings/events (indoors and outdoors) would be considered in June.

"Having recently returned to indoor business, bars and restaurants were certainly considered, which we were very happy to see. However no meaningful consideration has been given to nightclubs or indoor and outdoor music events, nor was any clear update given."

END_OF_DOCUMENT_TOKEN_TO_BE_REPLACED

Sharpe also said "little to no reference" has been made by the Government in relation to the events industry on rapid testing.

"The Government has also piloted large sports events, where attendances have been steadily rising to now tens of thousands per match. Again, we fully support this, but wonder why our industry is now the only remaining one without any date for return," the founder added.

In the letter, Sharpe outlined 13 points Give Us The Night wants to see addressed in a reopening plan. 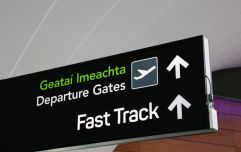 END_OF_DOCUMENT_TOKEN_TO_BE_REPLACED

Last week, Minister for the Arts Catherine Martin said she hopes the Government will be in a position to give a "clear signal" on a reopening plan for the live entertainment sector by the end of August.

You can read Give Us The Night's letter to Government in full below.

Irish venues, nightclubs and music events are being disregarded, and more closures are certain if this continues. We wrote to @MichealMartinTD @LeoVaradkar @cathmartingreen laying out a range of necessary measures to help our industry reopen safely and swiftly. pic.twitter.com/cDstl6fCP1

popular
QUIZ: Name the TV show from the end credits production logo
QUIZ: A perfect score is highly unlikely in this tough General Knowledge Quiz
QUIZ: Can you get top marks in this progressively harder capital cities quiz?
The JOE Friday Pub Quiz: Week 296
Lidl to launch its second 'reverse vending machine' in Ireland next week
Lidl announce a massive warehouse sale for one weekend only
Dublin's sixth 24-hour bus route launches today
You may also like
1 day ago
Claire Byrne Live to come to an end after seven years
1 day ago
Aer Lingus warns customers flying on Friday afternoon to check in at the airport
1 day ago
Dublin's sixth 24-hour bus route launches today
1 day ago
Bruce Springsteen adds extra Dublin date due to demand
1 day ago
Teenage girl in critical condition after collision between bike and car in Waterford
2 days ago
Calls for scrapping of M50 tolls to ease cost of living burdens
Next Page