The game led to a lot of controversy.

Some Republic of Ireland fans were condemned as "idiots" by their own government ministers for booing a rendition of God Save The Queen at the start of the match. 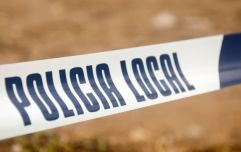 END_OF_DOCUMENT_TOKEN_TO_BE_REPLACED

Furthermore, unionist activist Jamie Bryson was also called out on social media when he mistook a Munster flag for a flag depicting a man in a balaclava.

Before the match, one photograph of a man holding up what appeared to be a flag bearing the emblem of the British Army's Parachute Regiment did the rounds on social media. The Parachute Regiment hold a particularly contentious place in Irish history, as the regiment's 1st Battalion was responsible for killing civilians during both the Ballymurphy massacre in Belfast, as well as on Bloody Sunday.

According to the Belfast Telegraph, a Royal Mail spokeswoman confirmed the man's suspension from his job as a postman. She also confirmed that the matter is under internal investigation.

"The individual concerned in this case is suspended from duty until our investigation is completed and we won't comment further until then," she said.

popular
Gardaí unveil new Armed Support Unit vehicles to replace older models
Netflix has just added 33 very big movies to its library
Fish and chips could be removed from Irish menus over rising fuel costs
The full list of cancelled flights in and out of Dublin Airport on Monday (so far)
NOW announces large reduction to its monthly membership prices
Increase in passenger charges at Dublin Airport may be on the way
One of the greatest crime movies of all time could be getting a sequel
You may also like
3 weeks ago
HBO pulls plug on huge $200 million show due to begin filming in Belfast
1 month ago
UK Foreign Secretary set to announce plans to rewrite NI Protocol
1 month ago
Why is the DUP blocking the election of a speaker in Stormont?
1 month ago
EU says renegotiation of the Northern Ireland Protocol is "not an option"
1 month ago
Piers Morgan says Sinn Féin's election success will lead to "inevitable collapse" of UK
1 month ago
"A historic day" - Sinn Féin wins most first preference votes in Northern Ireland election
Next Page