We expect this 'Performance Points Sports Scholarship' idea to catch on around the college scene in Ireland.

As the recently concluded Fitzgibbon and Sigerson Cups have shown, college GAA has never been bigger. There is a genuine interest in the games, even from those who have nothing to do with the schools involved, and the standard of the games is now sky high.

Add in all the other sports that colleges now compete in and the demand for the very best athletes to join your college is a real issue for Irish third level institutions. 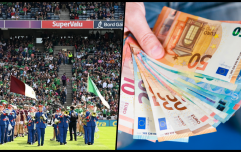 END_OF_DOCUMENT_TOKEN_TO_BE_REPLACED

All the major colleges now offer sports scholarships, and the range of benefits for recipients range from free use of certain facilities on campus to tuition fees and a subsistence grant being paid. Now NUIG have hit on a new idea to attract top class sporting prospects to their door.

Today they announced their 'Performance Points Sports Scholarship', which offers grants, coaching supports, physios and nutritional advice. But the big selling point is the extra 40 CAO points it gets you. Called 'Performance Points' this kicker to your Leaving Cert tally is designed to 'reward athletes who are performing at the highest levels of their sport while also achieving academically “performance points”.

There are a few rules, with the applicant having managed to hit 350 points on their own being the main one, but we expect this innovative idea will certainly appeal to many trying to decide what college to go to this Autumn.

And with 12 of the Clare All-Ireland winning panel former recipients of NUIG's Elite Sports Scholarship, they have the pedigree to back it up. We expect quite a few other institutions to follow suit.

For more on the idea, check out this page on the NUIG website.

popular
Nearly 100 flights delayed at Dublin Airport on Monday
QUIZ: Can you get top marks in this short but tricky Irish geography quiz?
Family of Ashling Murphy share heartbreaking tribute at Fleadh Cheoil
RTÉ tries to solve Michael Collins murder in new documentary
Motorcyclist in his 30s dies following two-vehicle collision in Kerry
Donald Trump says FBI agents 'raided' his Mar-a-Lago Florida home
4-year-old girl killed in Sligo caravan park named as Alice Dunleavy
You may also like
2 months ago
The 2 Johnnies share unbelievable catfish ordeal affecting over 40 people
2 months ago
Limerick hurler arrested following alleged altercation with Tipperary player in Limerick pub
3 months ago
Woman in her 20s dies after accident during Camogie match
9 months ago
Wicklow GAA to investigate fight after Under 15 match on Saturday
1 year ago
Post-match celebrations and a lack of social distancing at certain events put club game on hold
1 year ago
Cork GAA pleads with clubs and supporters “not to engage in celebrations that breach current guidelines”
Next Page