Footage of the party was shared widely on social media.

One man has been charged in relation to a public order incident that occurred in Castletroy in Limerick.

On Tuesday night, three men in their 20s were arrested after Gardaí broke up a street party in College Court housing estate near the University of Limerick. 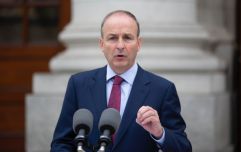 "It's not Groundhog Day" – Taoiseach takes exception to reopening remark

END_OF_DOCUMENT_TOKEN_TO_BE_REPLACED

Another man has been released without charge but has been issued with a fixed penalty notice (FPN) for public order offences.

A man arrested under misuse of drugs legislation remains detained at Henry Street Garda station in the city.

In total so far, over 50 FPNs have been issued in relation to breaches of the Health Act that occurred during the incident.

In a statement issued on Tuesday night, UL said it would take "action with strong disciplinary measures against any student who has been found to have breached public health guidelines.

"Students at UL are subject to a Code of Conduct," it said.

Significant number of Gardaí attended a public order incident in Castletroy this evening. Three arrests and over 30 FPNs for breach of Covid Regulations. Investigations ongoing to establish organisers of street party. pic.twitter.com/xNE0AzBpDI

END_OF_DOCUMENT_TOKEN_TO_BE_REPLACED

"The scenes in Limerick tonight are completely unacceptable and a slap in the face to everyone sacrificing so much. It does a real disservice to all students who abide by the rules day in and out.

"I have spoken to UL tonight. My understanding is a full investigation is underway by both the Gardai and by the university authorities. Any student in breach of restrictions and regulations must and will face serious consequences."

These thoughts were echoed by Minister of State at Department of Higher Education and Fianna Fáil TD for Limerick Niall Collins who said the scenes of the street party were "shocking beyond belief".