PICS: Storm Eleanor makes its way to Cork and Limerick

Storm Eleanor has well and truly left its mark on Ireland, causing mass flooding in Galway as the elements continue to rage.

Footage of flooding in Cork and Limerick has surfaced online as the country braces itself for a rough night.

George's Quay in #Limerick is impassable due to flooding. #StormEleanor

Iarnród Éireann has issued an update for commuters:

Bus transfers between Ennis and Limerick due to flooding near Limerick.

Bus transfers between Kilkenny/Carrick-on-Suir and Waterford due to flooding at Waterford Stn. 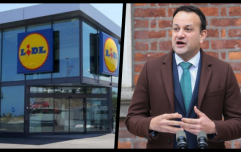 END_OF_DOCUMENT_TOKEN_TO_BE_REPLACED

It has been reported that over 50,000 households have been left without power in the west and north-west of the country.

On Tuesday morning, a status orange wind alert was put into place for over half of Ireland.

It will remain in place until Wednesday night.

Storm Eleanor: Please be careful
Damaging gusts causing poor driving conditions in Connacht and the midlands as the storm continues its track eastwards. Keep updated on developments by visiting our website. https://t.co/S9ed0cRNT3

popular
Public urged to be wary of sophisticated Revolut scam in operation in Ireland
'The Beast' apologises for storming off after losing on The Chase
A gripping mystery thriller is among the movies on TV tonight
QUIZ: Can you identify the countries that have blue, red and white as the colours of their flag?
The Tinder Swindler review: Exactly the kind of documentary Netflix should be making
Domhnall Gleeson's existential sci-fi nightmare is among the movies on TV tonight
COMPETITION: This is your LAST chance to WIN €1,000 this Dry January
You may also like
9 hours ago
Man charged following incident involving deceased man at Carlow post office
10 hours ago
Man in his 40s dies after road crash in Meath
10 hours ago
Over half of Irish workers found no change in productivity while working from home
21 hours ago
Appeal made for witnesses after cyclist hit by car in Kildare
1 day ago
"Don't you dare lecture me" - Taoiseach and Mary Lou McDonald clash in Dáil row
1 day ago
18-year-old woman attacked with metal pole by three men in Belfast
Next Page