Patel is facing major criticism for her remarks.

Earlier this week, British Conservative MP Priti Patel suggested that the UK should use the potential of food shortages in Ireland as leverage against the backstop being introduced.

A report from the British government, detailed on Friday in the Times of London, suggested that Ireland could face worse food shortages than Britain in the event of a no-deal Brexit.

END_OF_DOCUMENT_TOKEN_TO_BE_REPLACED

The report also suggested that Ireland would likely see a drop in GDP of up to 7%, against a figure of 5% for the United Kingdom.

As reported by The Times, Brexiteer Patel said:

"This paper appears to show the government were well aware that Ireland will face significant issues in a no-deal scenario.

"Why hasn't this been pressed home during the negotiations? There is still time to go back to Brussels and get a better deal."

END_OF_DOCUMENT_TOKEN_TO_BE_REPLACED

Patel's remarks were quickly condemned by the likes of Tánaiste Simon Coveney, Sinn Féin leader Mary Lou McDonald and First Minister of Scotland Nicola Sturgeon, the last of whom hitting out at "the sheer moral bankruptcy of the Brexiteers".

Since the publication of the report, the MP has moved to both deflect criticism by suggesting that her words were taken out of context:

It is clear my comments on‘ No Deal’ have been taken out of context by some. We should go back to Brussels & get a better deal. There is still time. Let’s take back control of borders, laws & money.

While also appearing to double down in retweeting a Change Britain post that supports her position: 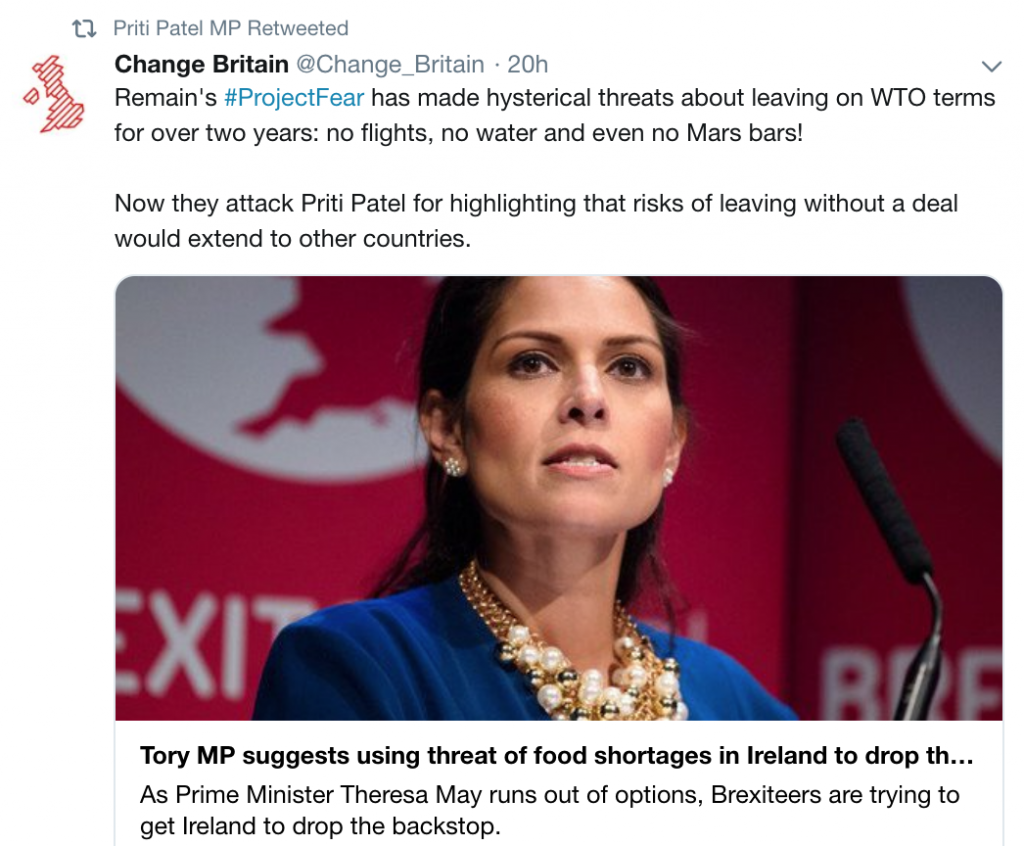 Unsurprisingly, Patel's comments have been widely criticised on social media.

Patrick Kielty, who has emerged as a pretty accurate voice of reason on these matters, weighed in with a fairly concise takedown:

"The starvation of innocent Irish men, women and children was one of the most shameful episodes in British colonial history," said Lammy.

"Priti Patel's comments expose either extreme callousness or ignorance. Shame on her either way for throwing salt at old wounds."

The SDLP's Mark Durkan also had strong criticism for Patel, who blasted her assertion that she was taken out of context.

"What thought did you give to their content or context?' he asked.

"Insulting people's intelligence won't redress or spin insults to identity and interests. But thanks for exhibit proof of the need for backstop and dangers without any parliamentary lock."

No, Priti, they weren't taken out of context. What thought did you give to their content or context? Insulting people's intelligence won't redress or spin insults to identity & interests. But thanks for exhibit proof of the need for backstop & dangers with any parliamentary lock!

Patel has yet to address the matter further.

popular
Gardaí urge public not to share "upsetting" pictures of fatal assault of Paul 'Babs' Connolly in Westmeath
QUIZ: You'll do well to get 100% in this General Knowledge Quiz
Disney+ has just added 10 big movies to its library
25 years ago, Sylvester Stallone delivered his best performance in a hard-hitting crime drama
FBI release findings of Rust investigation after shooting of Halyna Hutchins
QUIZ: You'll need to be razor-sharp to get 100% in this General Knowledge Quiz
The JOE Friday Pub Quiz: Week 307
You may also like
3 months ago
Plan to suspend Northern Ireland Protocol reportedly "days away"
3 months ago
Mary Lou McDonald says UK Government "gamesmanship" over Northern Ireland Protocol won't be tolerated
3 months ago
Listeners praise Patrick Kielty following emotional interview discussing his father's murder
4 months ago
Former Brexit minister hits back at Simon Coveney over Irish border comments
8 months ago
UK government "doesn't give a damn" about Ireland, says Pearse Doherty
8 months ago
Travel from Ireland to UK unaffected by new Covid measures to tackle Omicron
Next Page