The return of indoor hospitality being delayed by two or three weeks would cost the restaurant industry "tens of millions", says the Restaurants Association of Ireland.

The Restaurants Association of Ireland (RAI) has demanded to know if indoor hospitality will return as planned on the 5 July by Monday morning.

Subject to the public health situation at the time, 5 July is the date on which indoor services at pubs and restaurants can resume. 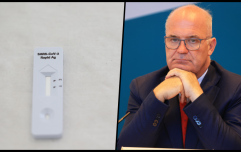 END_OF_DOCUMENT_TOKEN_TO_BE_REPLACED

However, the emergence of the Delta variant of Covid-19 has led to fears that the return could be postponed with government ministers stating a final decision on the matter will be made on Friday, 2 July.

The RAI, alongside the Licensed Vintners Association and the Vintners' Federation of Ireland, has urged the government to make a decision before then.

Speaking to Virgin Media News, Adrian Cummins of the RAI said: "What we want to see from the government now is a very clear statement from the government no later than Monday morning - what is the plan for indoor hospitality, will we open on the 5 July or will there be a postponement for two to three weeks?

"Businesses need to prepare. We need to put in orders for stock in order to reopen our businesses seven days later.

"We need to take people off the PUP [Pandemic Unemployment Payment], bring them back into work if we open on 5 July.

"There's so much uncertainty now at the moment and also for those businesses in the staycation, rural, regional Ireland - the summer will be lost if we have another three weeks of a postponement."

Cummins said the government needs to have a conversation with the hospitality sector immediately and called for the RAI to be told "as soon as possible" and "no later than Monday morning" the plan for indoor hospitality.

END_OF_DOCUMENT_TOKEN_TO_BE_REPLACED

Asked what the costs would be if indoor hospitality's return was delayed, Cummins said: "It's going to cost a huge amount of money.

Meanwhile, Denis McCauley, Chairman of the GP Committee of the Irish Medical Organisation (IMO), told Virgin Media News that a three-week delay could potentially see a further one million people vaccinated, which he said would have "a significant impact on the ability of the virus to spread".

According to new reports on Friday morning, a delay to the full return of indoor hospitality is looking increasingly likely.

The National Public Health Emergency Team (NPHET) is currently working on advice to be presented to government next week.

According to the Irish Times, government and official sources have indicated the full return of pubs and restaurants will be pushed back from the planned date of 5 July.

The Big Reviewski || JOE · The Big Reviewski with Andy Serkis, Squid Game follow-ups & the return of Succession
popular
New €140 million road officially opens today, replacing one of the Ireland's most dangerous roads
Expert wants 10 antigen tests delivered each week to every family this winter
QUIZ: Can you master this General Knowledge Quiz?
The JOE Movie Quiz: Week 124
The cleanest towns in Ireland have been named
QUIZ: Get your quiz on with this General Knowledge Quiz
The JOE Friday Pub Quiz: Week 265
You may also like
18 hours ago
Warning issued after vans follow couriers to steal packages ahead of Christmas
19 hours ago
Gardaí investigating after man robs hotel at knife point in Kerry
21 hours ago
Man arrested after multiple taxi drivers robbed at knife point in Cork
22 hours ago
Micheál Martin says Government "not contemplating going backwards" on Covid-19 restrictions
1 day ago
Investigation launched after window smashed at Canada Goose store in Dublin
1 day ago
Emergency services rush to high-rise building on fire in Tallaght
Next Page