A number of bi-lingual road signs were attacked in the past week.

Speaking to the MidUlster Mail after a spate of attacks on signage in the Loup area of south Derry, Clarke said: "These signs have been erected at the behest of local residents following a process whereby residents follow the democratic process to have their road or street named bi-lingually.

END_OF_DOCUMENT_TOKEN_TO_BE_REPLACED

"Defacing and destroying this signage is therefore attacking the legitimate aspirations and demands of these local communities.

"It is also an absolute waste of ratepayers money because these signs will be replaced as necessary."

A number of images of the signs that have been vandalised were compiled and shared on the Facebook and Twitter page for An Dream Dearg, an Irish language group. 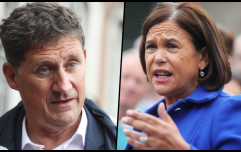 END_OF_DOCUMENT_TOKEN_TO_BE_REPLACED

Speaking to JOE, a spokesperson for An Dream Dearg said: "There appears to be some sort of coordination with the recent attacks. This isn’t just spray painting etc...but people bringing heavy tools to dismantle signs.

"Some have been cut in half, some unrooted from the ground and others paintbombed etc."

An Dream Dearg was set up in response to the decision by DUP Minister Paul Givan to cut the Líofa Gaeltacht Bursary Scheme.

popular
QUIZ: Test your knowledge with this Ultimate Friends Character Quiz
Details of cash payments and Christmas bonus outlined in Sinn Féin’s alternative budget
The JOE Friday Pub Quiz: Week 313
House Of The Dragon is already better than Game Of Thrones
A brilliant psychological thriller is among the movies on TV tonight
Amazon Prime Video has just added 20 very big movies to its library
One of the best films nobody went to see turns 15 years old this week
You may also like
1 week ago
King Charles demonstrates Sinn Féin knowledge in chat with Michelle O'Neill
1 week ago
New poll suggests that Fine Gael support is at record low
2 weeks ago
Sinn Féin streets ahead in newest public opinion poll
4 weeks ago
McDonald: Robert Troy's resignation "casts very serious questions" of Taoiseach and Tánaiste
1 month ago
Defence Forces soldier recovering after collapsing during Taoiseach's Michael Collins speech
1 month ago
Sinn Féin accused of "climate denial" in stinging criticism of indecision on emissions
Next Page