Rural commuters are set to be the most affected by plans by Bus Eireann to drastically cut their services throughout the country in the near future.

According to today’s Irish Independent, Bus Eireann are planning on cutting the number of routes in affected areas from 198 to 105, which would leave many towns and villages throughout the country without a direct link to the capital. 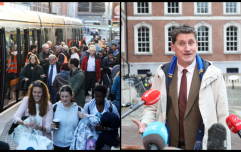 SIPTU calls for reduction in passenger capacity on public transport

END_OF_DOCUMENT_TOKEN_TO_BE_REPLACED

The routes under threat are Routes 5 (Dublin – Waterford, via Wicklow and Wexford), 7 (Dublin – Cork, via Kilkenny and Clonmel) and 21 (Athlone to Westport), with Bus Éireann chief executive Martin Nolan citing loss of revenue and the need for Government investment as reasons behind the proposed cuts to services.

"We are reluctant to come out of anywhere ... but the services cannot stay on the road if we do not make money," Nolan told the Irish Independent.

"Bus Éireann is following the market, we will have a number of towns and villages affected. We have two options - close the route, or conduct surgery.

"When that is forced upon us, what happens to the towns which are left behind? If the market is favouring the bigger towns and cities, the bit in the middle is going to be expensive (to service).

"It's a difficulty for a State company to come out of towns and villages, but it's a question of survival."

popular
Secretary-General for Department of Health receives €81,000 salary increase
Amazon Prime Video has just added 16 big movies to its library
18-year-old woman attacked with metal pole by three men in Belfast
The Tinder Swindler review: Exactly the kind of documentary Netflix should be making
"Don't you dare lecture me" - Taoiseach and Mary Lou McDonald clash in Dáil row
QUIZ: Can you get 10/10 and correctly name all of these fruits?
QUIZ: We bet you can't get full marks in this extremely frustrating geography quiz
You may also like
3 months ago
Dublin Commuter Coalition calls on Eamon Ryan to answer questions on DART+ delays
4 months ago
Eamon Ryan confirms public transport will return to 100% capacity next week
1 year ago
Bus and rail union wants compulsory face masks on public transport
3 years ago
Public transport usage in Dublin hit record high in 2017
3 years ago
Most transport services will be operating on Monday - but don't expect a "normal" day
3 years ago
Here's the state of play with public transport from Saturday morning
Next Page