UPDATED: Search for young fisherman stood down following discovery of body in Cork

"Some of the larger, well equipped local fishing vessels have been assisting us with our operation and we wish to thank them for their efforts thus far."

Gardaí have officially stood down a multi-agency search operation for a young fisherman who who went missing off the coast of Cork on Wednesday.

The body of a man was located at sea on Sunday evening, 13 October.

The deceased has not been formally identified, though An Garda Síochána have noted that all search operations have been stood down.

The man, named locally as Kodie Healy, who is in his 20s, failed to return home on 9 October, and the wreckage of a boat has since been discovered near the coastline in Dunmanus Bay.

Members of An Garda Síochána, members of the Coast Guard, Irish Naval Service, Civil Defence and the Royal National Lifeboat Institution are continuing to carry out searches in the Dunmanus Bay area. 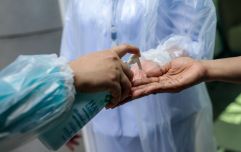 END_OF_DOCUMENT_TOKEN_TO_BE_REPLACED

Gardaí thanked the public for their willingness to assist them in the search but cautioned the public not to put themselves in danger in their attempts to help and to instead leave it to the emergency services.

Speaking at Bantry Garda Station, Superintendent Declan O Sullivan said: "On behalf of all of the agencies involved in this search operation, I would ask for members of the public not to put their lives at risk by taking to the water around the search area, or by walking around the shoreline and cliff edges, in an attempt to assist us.

"We understand that your assistance is well-intentioned, but you are putting yourself at risk in poor weather conditions.

"Some of the larger, well equipped local fishing vessels have been assisting us with our operation and we wish to thank them for their efforts thus far. Emergency services will indicate what assistance the public could provide if necessary."


popular
QUIZ: Try get 12/12 in this short general knowledge quiz
ALL McDonald’s drive-thru restaurants in Ireland to reopen by the end of next week
QUIZ: Can you beat your gang and get more than 15/20 in this "It's Always Sunny in Philadelphia" quiz?
QUIZ: How well do you remember the final season of Game of Thrones?
QUIZ: Can you name the country for each of these non-capital cities?
PERSONALITY QUIZ: Which Normal People character are you?
Gardaí announce major roads operation targeting four 'lifesaver' offences over Bank Holiday weekend
You may also like
2 hours ago
Temperatures to hit 26 degrees in parts of Ireland tomorrow
22 hours ago
80 incidents of spitting and/or coughing at Gardaí confirmed since introduction of Covid-19 guidelines
23 hours ago
Irish pubs and restaurants could see capacity reduced by 87% due to Covid-19
1 day ago
Be in with a chance to win over €50,000 for your local organisation in the Great Community Challenge
1 day ago
Man dies following traffic collision in Limerick
1 day ago
IFA President brands TikTok farming prank videos a "disgrace"
Next Page