The 24-hour news channel has been broadcasting for 28 years across 138 countries, and may soon be coming to an end.

Yesterday we reported on the fact that Disney were in very early talks on buying 21st Century Fox, which would see them owning some very impressive intellectual properties.

Today, the Financial Times are reporting that Sky has threatened to close down Sky News permanently if it remains an issue in the selling of the company to 21st Century Fox. 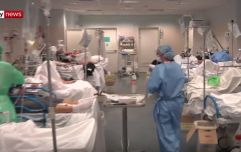 END_OF_DOCUMENT_TOKEN_TO_BE_REPLACED

Rupert Murdoch, a majority shareholder and CEO of both Sky and 21st Century Fox, is looking to sell one to the other, in a £11.7bn takeover of the European pay-television operator.

The UK’s Competition Markets Authority received a submission from Sky which warned that the fears of a media monopoly in the UK should the purchase of Sky by Fox go through could be allayed by Sky effectively shutting down Sky News.

However, the purchase and ownership of Sky by 21st Century Fox was not a part of the potential Disney buy-out, and should the Competition Markets Authority allow the sale, it may further complicate that Disney deal.

"There is no legal opportunity for Disney to secure Sky right this minute or at any time before the Fox-Sky transaction clears the full regulatory process. Fox is legally bound to make an offer to the minority Sky shareholders."

popular
The 50 most iconic songs of all time* have been revealed
Amazon Prime Video has quietly added 10 big new movies to its library
Clint Eastwood's final western is among the movies on TV tonight
The JOE Movie Quiz: Week 130
The best memes from this year's Late Late Toy Show
The Toy Show DJ brothers have been offered their very first gig
QUIZ: Name the films referenced by The Simpsons
You may also like
2 years ago
Sky News shelves TV debate after Boris Johnson declines invite
2 years ago
These were the five biggest stories you might have missed this week
2 years ago
WATCH: Pro-Brexit MP ushered away from live debate by Sky News host
3 years ago
Sky News accidentally report that Pope Francis has arrived in England
3 years ago
A Sky News presenter messed up Leo Varadkar's name so badly that it warrants rewinding 1,000 times
4 years ago
A Sky News Investigation has revealed the dark side of Facebook
Next Page