Wildlife authorities in Northern Australia have shared photos of a three-eyed snake that was found on a highway.

On the Northern Territory Parks and Wildlife Facebook page, close-up images of the snake revealed that it was not two heads forged together, and that it was instead "one skull with an additional eye socket and three functioning eyes."

Although this sounds absolutely terrifying, the snake actually looks a little bit adorable as well.

Take a look, and enjoy their little Game of Thrones joke:

The experts working for the wildlife group said that it was generally agreed that the eye likely developed very early during the embryonic stage of development.

They also said that it is extremely unlikely that the abnormality is from environmental factors and is almost certainly a natural occurrence as malformed reptiles are relatively common.

Sadly, Monty Python (the nickname that the snake was given), died shortly after it was found. 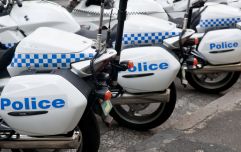 END_OF_DOCUMENT_TOKEN_TO_BE_REPLACED

Snake expert Prof Bryan Fry told the BBC that mutations were a natural part of evolution.

"Every baby has a mutation of some sort - this one is just particularly gross and misshapen," said Prof Fry, from the University of Queensland.

"I haven't seen a three-eyed snake before, but we have a two-headed cobra python in our lab - it's just a different kind of mutation like what we see with Siamese twins."

He also suggested that the snake's third eye may have been "the last little bit of a twin that's been absorbed".


The Architects Of Business || JOE · "It doesn't get bigger than this for me" - Irish scientist wins EY Entrepreneur of the Year 2020
popular
The JOE Friday Pub Quiz: Week 219
Ireland will move to Level 3 on Tuesday, here's what that means
QUIZ: Can you answer all the £1 million questions from Who Wants to be a Millionaire?
QUIZ: Can you name the Irish person from their Wikipedia page?
The JOE Movie Quiz: Week 79
QUIZ: How will you fare in our ‘Not as it seems’ quiz?
5 craft beers to introduce you to the wonderful world of locally produced beer in Ireland
You may also like
9 months ago
113 animal species require "urgent help" following Australian fires
9 months ago
Australian fire brigade post truly scary video of a bushfire spreading wildly in just three minutes
10 months ago
Three US firefighters die in Australia as water tanker plane crashes
10 months ago
Death toll of animals exceeds one billion as new bushfire and evacuation warnings issued in Australia
10 months ago
Instagram model raises over $500,000 for Australian bush fires by selling nudes
10 months ago
WATCH: Thermal camera reveals horrific extent of Australian fires
Next Page