Okey doke, we'll leave it there so

If you can't get Eamon Dunphy and the lads to appear at your wedding (we reckon they'd be a bit of craic on the dancefloor anyway), then the next best thing you can do is get footage of them sending their best wishes for the wedding. 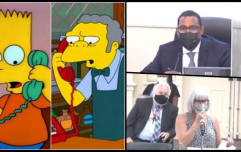 END_OF_DOCUMENT_TOKEN_TO_BE_REPLACED

That's exactly what Julie-Ann Coleman, who was getting married to Dave Jones over the weekend, did for her new husband, as she managed to get the lads from the RTÉ panel to send their best analysis of the event via a video, which was played for all the guests and a pretty shocked groom at the festivities over the weekend.

The video was taken last October on the night of the Ireland v Germany game by the wedding videographer, Gary, who stated on the YouTube description that the whole thing was done with no script or rehearsal in one shot, but that the boys were "the consummate professionals, absolute gentlemen".

If you want to see the original version of the panel giving their analytical treatment to the wedding, then you can watch it over here.

Hat-tip to Martin Regan for sending this our way

popular
18 counties hit with weather warning as temperatures set to reach 29 degrees
Netflix has just added an incredibly tense 97-minute thriller
Pogues bassist Darryl Hunt has died, aged 72
Nearly 100 flights delayed at Dublin Airport on Monday
QUIZ: Can you get top marks in this short but tricky Irish geography quiz?
Public urged to conserve water as around 60 areas at risk of supply shortages
QUIZ: Can you name all the counties in Ireland without the letter 'E'?
You may also like
1 month ago
Doctor reveals why couples should always sleep in separate beds
10 months ago
"Only in Dublin" - Viral clip sees three men remove sofa from window with sweeping brushes
1 year ago
WATCH: The incredible lengths this Irish dad is going to for his "miracle" daughter
2 years ago
WATCH: Would you give in to the toughest GAA fan temptation?
3 years ago
WATCH: TV Presenter Mairead Ronan tries to guess the mystery car
3 years ago
WATCH: Stunning drone footage of Connemara following recent snowfall
Next Page