We've all been there, you've been sitting at your desk for what feels like 19 months and you still have another three hours until 5 o'clock comes around.

What do you do to pass the time? You could always do your work, yeah right! Slouching at your desk while staring into space, or quietly cursing your workload seem like fine choices to us. 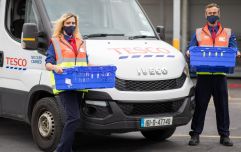 END_OF_DOCUMENT_TOKEN_TO_BE_REPLACED

Well apparently, 38% of workers nip off to the toilet and spend a few minutes on their phone or simply just sit on the throne and contemplate their existence.

According to a survey by Yakult to mark Gut Week 2015, 43 % of men use toilet breaks in work as a way to take a sly little 10 minutes off work.

But it seems that their female counterparts are considerably less likely to use a toilet break to get a bit of time away from their desk.

Just 32% of women admitted to using the loo as a location to get away doing any work.

Potential employers should be wary of the younger generation though because 69% of workers surveyed aged 18-24 admitted to skiving off work by executing their right to a toilet break.

As this JOE writer represents this particular demographic, it's my duty to say that I decline to comment on the veracity of that last claim.

The Big Reviewski || JOE · TBR Spotlight: Loki - Episode Two - 'The Variant'
popular
The JOE Friday Pub Quiz: Week 248
QUIZ: Can you name all these European countries from a list of cities?
Met Éireann says temperatures set to hit 20 degrees this weekend
QUIZ: Can you get full marks in this potentially very frustrating general knowledge quiz?
Three men arrested after reportedly attacking staff of premises on South William Street
Canada has been removed from the mandatory hotel quarantine list
The 50 most iconic songs of all time* have been revealed
You may also like
1 month ago
Aldi "hugely committed" to opening 50 new stores in Ireland
1 month ago
Penneys encourages laid-off Carphone Warehouse workers to "get in touch" to apply for jobs
1 month ago
Aviation company Shannon Technical Services to create 80 new jobs and open Dublin office
1 month ago
486 jobs lost as Carphone Warehouse closes all Irish stores
2 months ago
Deloitte announces plans for 300 new jobs in Ireland
2 months ago
87% of RTÉ staff reject proposals for salary cuts as part of cost-saving measures
Next Page