Gardaí have said high visibility patrols will continue in the area over the Bank Holiday weekend.

Gardaí seized a number of suspected weapons seized and arrested two boys after an "organised fight" along the railway tracks in Kilbarrack.

In a statement, a Garda spokesperson said an intelligence-led operation was conducted at around 5:30pm on Friday following reports of "an organised fight within the confines of one of the railway networks in the Kilbarrack area".

END_OF_DOCUMENT_TOKEN_TO_BE_REPLACED

Gardaí arrived at the scene and intercepted, dispersing a group of people. A number of weapons were discarded by the group when dispersing and were later seized by Gardaí.

The weapons seized include a box cutter, a crutch and a screwdriver.

At around 6:30pm, Gardaí say a follow-up operation was conducted and two male juveniles were arrested in the area for public order offences. The boys are currently being detained at Raheny Garda Station.

The seizure and arrests were made as part of ongoing proactive patrols targeting anti-social behaviour in the DMR North area under Operation Irene, the Garda spokesperson said.

Gardaí have said high visibility patrols will continue in the area over the Bank Holiday weekend and that they continue to liaise closely with Irish Rail.

An image of some of the weapons retrieved is below. 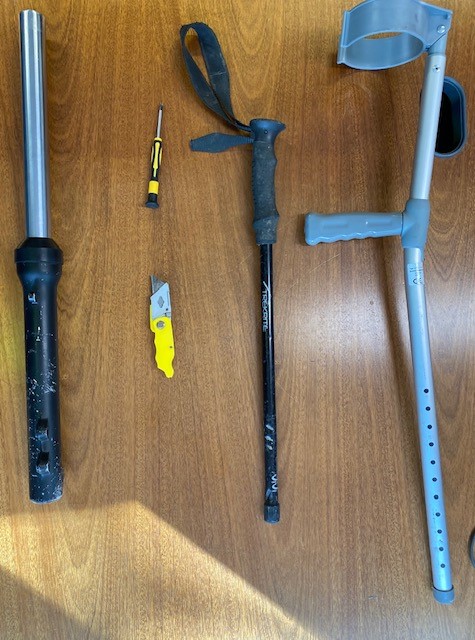