There's no getting away from it.

There's no getting away from the weather, either, as it is a tangible presence that affects us at every turn.

The answer is... January.

Yep, it's not amazing. It's not terrible, either. Call it a mixed bag.

Friday night - 3 January - should continue dry in most areas according to the latest forecast from Met Éireann, but you can also anticipate a mix of cloud and clear spells.

The west and north of the country should experience the thickest of the clouds alongside some patchy light rain or drizzle. Munster and Leinster, meanwhile, will have clear skies and patchy frost.

Lowest temperatures will range between two and five degrees, generally. 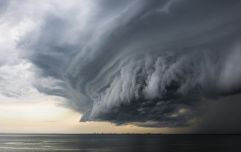 END_OF_DOCUMENT_TOKEN_TO_BE_REPLACED

Saturday will be a notably cloudier affair as the weekend kicks in. Bright and sunny breaks are expected, however, and will be at their sharpest in the east and southeast.

As the day opens up, scattered patches of light rain or drizzle should affect western and northern counties, eventually spreading nationwide.

The forecast notes that this will be a small amount, though, with dry conditions in place most of the time against a temperature backdrop of seven to 10 degrees.

Expect fresh to strong and gusty winds near west and northern coasts, too.

Saturday night will be a mixture of cloudy and clear with "occasional" light rain and drizzle for company. Isolated mist patches are expected on hills and coasts alongside lows of five to eight degrees.

As for Sunday, "breezy and rather cloudy overall" is the verdict.

Outbreaks of rain will hit Connacht, west Ulster and west Munster, though it should stay mostly dry elsewhere with some sunshine happening along every now and then.

Sunday will also bring the highest temperatures so far, too, ranging between nine and 11 degrees in moderate to fresh southwesterly winds.

Speaking of, the evening will be blustery enough as the clouds thicken across the country and rain pushes in off the Atlantic towards Monday morning.

Lows of six to eight degrees are predicted, with winds nearing gale force on the coasts.

The early outlook for next week doesn't make for the most splendid of reading, either, with both Monday and Tuesday seeing more outbreaks of rain and drizzle along with strong winds.

That said, it should be cool and bright so... we'll take it?


popular
The JOE Friday Pub Quiz: Week 180
QUIZ: Do you know your dashboard warning signs?
QUIZ: Can you name all 14 landlocked counties in Ireland?
QUIZ: Can you guess the pixelated album cover?
The most popular baby names in Ireland in 2019 have been revealed
The line-up for this week's Late Late Show is here
Storm Jorge: Status red warning issued for Galway and Clare, two new weather warnings issued for 19 counties
You may also like
10 hours ago
The most popular baby names in Ireland in 2019 have been revealed
1 day ago
Liffey Cycle Route trial looks to be going ahead
1 day ago
Two arrested following "disturbance" at funeral in Tyrone
1 day ago
Pygmalion nightclub drops entry fee and asks for charity donation instead
1 day ago
Met Éireann issues four separate weather warnings as Storm Jorge approaches
1 day ago
ISPCA rescue horse tied to electricity pole in Tipperary
Next Page