Enda Kenny to retire from Dáil at the next election

This will be the first time in over 60 years that the Kenny surname will not appear on a ballot paper in the Mayo constituency.

Enda Kenny has announced that he's officially calling time on his career in the Dáil, as Fine Gael members gathered in Mayo on Sunday evening to select the party's candidates for the next election.

The former Taoiseach will officially retire from parliament at the next election, making it the first time in six decades that the Kenny surname won't appear on the ballot paper in the mayo constituency. 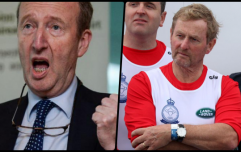 END_OF_DOCUMENT_TOKEN_TO_BE_REPLACED

His father, Henry Kenny was elected to Dáil Éireann during the 1954 general election, as a Fine Gael TD for the Mayo South constituency.

Mr Kenny addressed Sunday evening's convention in Castlebar, telling delegates that he had been honoured to have been given the support of voters in 13 successive elections. 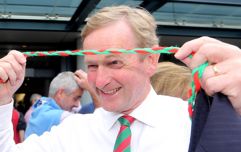 END_OF_DOCUMENT_TOKEN_TO_BE_REPLACED

Kenny is the longest-serving TD currently in Dáil Éireann, having first been elected in a by-election in 1975, which makes him the incumbent Father of the Dáil.

He took the seat that his late father Henry had held for the previous 21 years and retained it in every election since then.

Kenny retired as party leader of Fine Gael back in May 2017 and finished up his role as Taoiseach on 2 June.

popular
Netflix has just added an incredibly tense 97-minute thriller
Prime Video has just added 25 very big movies to its library
The Ultimate "That Actor From That Thing" Quiz
Stunning Mayo beach named the best place to swim in Ireland and the UK
WATCH: House of Hammer details the alleged crimes of award-winning actor Armie Hammer
The 50 most iconic songs of all time* have been revealed
A county-by-county breakdown of the average rent in Ireland as rent inflation reaches record high
You may also like
1 year ago
Here's the lineup for this week's episode of The Late Late Show
2 years ago
Enda Kenny has missed 96% of Dáil votes since stepping down as Taoiseach
3 years ago
Enda Kenny and Bear Grylls join forces for victory at inaugural yachting regatta
3 years ago
PIC: Enda Kenny is now rocking a scruffy beard and it's quite something
4 years ago
Enda Kenny answers rumours about running for Presidency against Michael D. Higgins
4 years ago
Enda Kenny to be rewarded for hard work as Taoiseach with honorary doctorate from NUI Galway
Next Page