Fine Gael's first day of campaigning began with a disaster that seemed inevitable under the conditions that have come to pass with Ireland in their custody.

Before any election was called, homelessness was set to be a major issue facing the Fine Gael government seeking re-election. Then, on the same day that the election was announced, a homeless man suffered what have been described as "life-changing" injuries.

The man, who had been inside a tent by the banks of the Grand Canal was (and I'll borrow some press officer lingo in order to explain) "moved" by an "industrial vehicle". The consequence of this "movement" was that the man ended up in serious condition, receiving surgery at St. Vincent's Hospital. 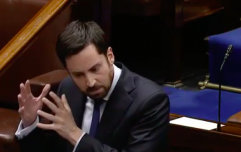 Minister for Housing Eoghan Murphy survives vote of no confidence

END_OF_DOCUMENT_TOKEN_TO_BE_REPLACED

The official statement by the Gardaí explained that the action was taken in an effort to "tidy the canal walk way". It's a particularly nauseous narrative and not one that anyone should be quick to parrot. Human beings, inconvenient though we may be, are not something to be tidied away.

Taking a similar line, Dublin City Council explained that Waterways Ireland were simply "removing tents that were placed in a precarious and dangerous location". Well, thank goodness they were moved somewhere safer! Somebody could have been hurt.

Or maybe they meant that the tents were in a precarious and dangerous location for the public. That makes even more sense, with A&Es the country over crowded with people who've been mercilessly attacked by roving bands of sentient tents and sleeping bags.

More than 24 hours later, a lone Garda van kept watch over the scene where the man was injured. Caution tape flapped and twisted and a harsh wind blew down the traffic cones holding it up. Metres above the very space where the man had been scooped up, like a binbag, by the industrial vehicle, two posters of Minister for Housing Eoghan Murphy were zip-tied to a lamppost. 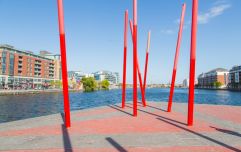 Dublin's dystopia: The age of man is over, the age of hotels is now

END_OF_DOCUMENT_TOKEN_TO_BE_REPLACED

Later today, Murphy took to Twitter to express his sadness over the man's injury, and to note that his posters had been taken down. Don't thank me folks, I'm no hero, I'm just doing my job.

If anything, taking down the posters feels like an admission of guilt. Why would he take them down unless he knows, as well as we know, as well as the dogs in street running away from the industrial vehicles know, that it's on his watch that homelessness has become such a full-blown crisis?

‘People now feel safer sleeping on the streets in tents than they do in hostel-style facilities.' 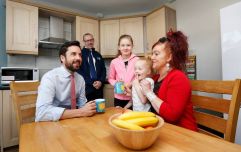 END_OF_DOCUMENT_TOKEN_TO_BE_REPLACED

Just outside the cordoned off area, a bouquet of flowers is taped to a tree. Two yards further up the walkway, there's a black bin with the word "FASCISM" spray-painted on its side with white lettering. If it were a political cartoon, it would be too on the nose.

And yet, here we are, in modern-day Dublin - where those who end up on the streets can't even sleep soundly in a tent for fear it will be upended into a dump truck in broad daylight.

While in the area, several residents of the constituency stopped to ask me what had happened. One even noted that he'd been aware of the tent for months, and that he'd assumed there was nobody inside.

Not to put too fine a point on it, but this is one of Ireland's most salubrious neighbourhoods. By the iconic Grand Canal, rushes and reeds shine gold in the low-hanging January sun. Swans are swimming. The yuppies, no disrespect to them, walk up and down the canal for lunch each day. Wilton Terrace is a two-minute walk from the offices of LinkedIn (net worth $26.2 billion), a four-minute walk from Amazon Ireland (owned by the richest man in the world, Jeff Bezos), and nine minutes away from Chinese tech giant Huawei ($26 billion).

This is the constituency that returned Murphy the last time around, with the highest share of first-preference votes of any candidate in the area. Times have changed since then, but will it mean anything to Murphy or Fine Gael when election day comes?

Varadkar's argument is facile, and has been addressed regularly by anti-homelessness activists and homeless people themselves, who have made it clear that they often do not feel safe in hostel-style emergency accommodation.

Speaking to JOE today, Councillor and CEO of Inner City Helping Homeless Anthony Flynn said that people "feel safer sleeping in tents," and we've all seen for ourselves just how safe that is.

Not that Leo seems too worried about all of this mind. He also jumped in an industrial vehicle himself for a photo-op, irony-be-damned.

Day 1 and we’re in Combilift in Monaghan to talk #Brexit. Brexit isn’t done, we’re only at half time. Next, we must negotiate a new trade deal to protect our jobs & economy. Our team has the experience, the track record and the relationships to deliver that deal #LookForward pic.twitter.com/LC0UIbYo7w

So how's this for irony; for 12 hours today, a poster of the Minister for Housing's smiling face hung directly above the scene where a homeless man had earlier been carelessly turfed, excuse me, tidied into surgery for life-changing injuries.

That same Minister for Housing has survived two motions of no confidence while in his role. In just over three weeks, he and his party will go before the people.

If day one is anything to go by, their legacy will haunt them all the way to the finish line.

popular
Amazon Prime Video has just added 21 big movies to its library
Netflix has just quietly added 12 big movies to its library
Seven more suspected cases of unexplained hepatitis in Ireland under investigation
Gardaí investigating firearm being discharged near film set in Donegal
Couple injured after alleged homophobic attack in Dublin
The 50 most iconic songs of all time* have been revealed
Derry Girls fans in bits following emotional season finale
You may also like
2 weeks ago
Housing Minister says economic migrants are factor in rising homelessness levels
1 month ago
Number of affordable properties available to rent falls by 92% since June 2021, "stark" new report finds
1 year ago
This lady’s moving story really shows how homelessness affects Irish children
1 year ago
WATCH: This powerful new Irish ad really puts everything into perspective
1 year ago
Two homeless men found dead in Dublin
1 year ago
Peter McVerry Trust to deliver over 210 social housing units in Ireland in the next 12 months
Next Page