QUIZ: Can you name every Irish Oscar winner?

The Oscars are only just around the corner, and there's plenty of reasons for Irish people to be excited.

Kenneth Branagh's Belfast alone garnered seven nominations in 2021, and there is loads of excellent Irish work being recognised on the world stage along with it. 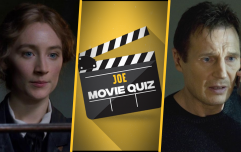 END_OF_DOCUMENT_TOKEN_TO_BE_REPLACED

However, only 13 Irish people have ever won an Oscar in their careers.

So, you've got two minutes to name the person or the film they won the Oscar for.

To give you an extra hand, we've provided the category they've won the Oscar for, and the year if it was multiple people winning in the same category.

So get your film buff hats on, and happy quizzing!

popular
Simon Cowell concerns fans with appearance as they 'don't recognise him'
The JOE Friday Pub Quiz: Week 323
'Sopranos' star Frank Vallelonga Jr found dead in the street
Netflix has just added 30 big movies to its library
Junior doctor 'fell asleep' at the wheel after 12-hour shift then mowed down two women and two kids
20 years ago, one of the best sci-fi movies of the 21st century was a box-office bomb
Miss Croatia wears revealing outfit at World Cup game despite Qatar's dress code
You may also like
4 hours ago
Here's the line-up for tonight's episode of The Graham Norton Show
10 hours ago
Bad Sisters stars snap back at New York Times article that called them British actors
10 hours ago
Orange is the New Black actor Brad William Henke dead aged 56
1 day ago
An Oscar Best Picture winner is one of the movies on TV tonight
1 day ago
Simon Cowell concerns fans with appearance as they 'don't recognise him'
1 day ago
Here's the line-up for this week's episode of The Late Late Show
Next Page