JOE launches 'Argue Me' — a new show on Snapchat Discover

Ever been in a really heated argument?

Then you'll understand the passion, the pleasure, the drama that comes with the theatre of debate.

As such, Snapchat approached JOE to partner up on a new series, titled Argue Me, a brand new show that focuses on a good old-fashioned heated back and forth.

END_OF_DOCUMENT_TOKEN_TO_BE_REPLACED

Of course, there was no better man to head this up than our own Carl Kinsella, who will take an assortment of interlocutors to task over the course of the show in a bid to beat them down.

This is Episode 1 of Argue Me, in which Carl sits down with social media sensation Michael Fry (alias @BigDirtyFry) and others to argue about the most contentious substance in the entire world - tea. 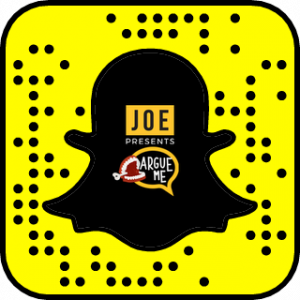 Check it out at this link.

popular
QUIZ: Can you get top marks in this short but tricky Irish geography quiz?
Nearly 100 flights delayed at Dublin Airport on Monday
4-year-old girl killed in Sligo caravan park named as Alice Dunleavy
Grease star Olivia Newton-John has died, aged 73
Man in his 20s in critical condition following assault at public transport stop in Dublin
RTÉ tries to solve Michael Collins murder in new documentary
The JOE Movie Quiz: Week 166
You may also like
3 months ago
What is BeReal? The new social media platform taking Ireland by storm
2 years ago
Instagram said to be working on a new app to rival Snapchat
3 years ago
Arnold Schwarzenegger releases statement after getting dropkicked at event
3 years ago
New Irish Instagram-style app aims to replace your CV for good
3 years ago
Episode 2 of JOE's Snapchat show Argue Me is live: Tinder or the old-fashioned way?
3 years ago
Snapchat announces five new unique Irish Shows for its Discover feature
Next Page