Mario Rosenstock was the guest on this week's episode of Ireland Unfiltered with Dion Fanning and if you haven't listened to the full interview, we advise that you to check it out.

In a wide-ranging interview, Rosenstock discussed everything from his relationship with his father, to Roy Keane, Saipan and his comedy career.

END_OF_DOCUMENT_TOKEN_TO_BE_REPLACED

But he also told a remarkable story about his grandfather and how he resisted allowing a known Nazi settle in Ireland following World War II, contacting several politicians in the process.

Rosenstock's grandfather had been in the German army as a doctor and was stationed in Jersey during World War II, which was where he met his wife from Athenry, who was working as a nurse over there.

The pair fell madly in love and moved to Ireland when the war ended where he opened a doctor's practice.

Rosenstock tells the story of how he was contacted by someone from the Irish History Podcast, who had found some information about his grandfather following some investigations about post-World War II Ireland.

He had expected the historian to tell him his grandfather was a Nazi, but on the contrary, Rosenstock was informed that his grandfather had campaigned heavily not to allow one of Hitler's leading lieutenants, Otto Skorzeny, to move to Ireland following the conclusion of the war.

SS commando Skorzeny was one of Hitler's right hand men, and one who was entrusted with such tasks as rescuing Mussolini from Allied hands.

"He was an SS paratrooper, very close to Hitler", Rosenstock said. "He was Hitler's go-to Nazi.

"This guy was such a Nazi badass, that even Nazi badasses went, 'I think we need to up the ante here'.

END_OF_DOCUMENT_TOKEN_TO_BE_REPLACED

"After the second World War, he was released from an internment camp in 1948 with no money and in a few years, became incredibly wealthy and sought residency in Ireland," he said.

He continued: "One of them, this guy Otto Skorzeny... was invited to attend a party in Portmarnock golf club and this party was attended by the high and mighty of Dublin society, would you believe, including Charles J Haughty TD and Paddy Burke, father of Ray Burke."

It turns out that Skorzeny was being welcomed with open arms in Ireland and was looking to buy a big house, Martinstown House in County Kildare. The Irish government at the time were considering giving him residency.

"One of the people that kicked up about this was my grandfather," said Rosenstock. "He began by writing letters to the Irish Times, which we have, and he started saying, 'Nazi in our midst, I am a German living in Ireland and I abhor what happened to Jews and anti-semitism and this guy is a Nazi and must be gotten out of Ireland'. 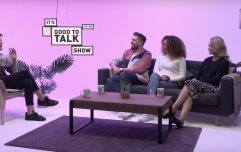 END_OF_DOCUMENT_TOKEN_TO_BE_REPLACED

"He wasn't listened to and he applied to Oscar Traynor, the then Minister for Justice, to have a look at this situation and he also wrote a letter to Bob Briscoe, a well-known Irish Jewish politician, father of Ben Briscoe.

"Bob Briscoe was appalled by this and he brought it to Oscar Traynor who basically told him to F--- off," Rosenstock said.

Rosenstock spoke of the pride he felt for his grandfather when he heard this story about him fighting to not allow Nazis into Ireland at a time when the Irish government sympathetic towards them.

In the end, the secretary of the Department of Justice Peter Berry advised that Skorzeny be given permanent residency. His view was supported by his minister Oscar Traynor. However, minister for external affairs Frank Aiken strongly advised Justice against granting residence and permission was refused.

You can listen to the interview with Mario in full below.