Martin McVicar, the Founder of Combilift in County Monaghan, hopes to be at the helm of a billion dollar business within the next five years.

With a manufacturing plant three and a half times the size of Croke Park and the fact that his Combilift company exports to 85 different countries across the world, Martin McVicar expects to be at the helm of a billion dollar company by 2023.

Speaking to host Tadhg Enright on The Architects of Business, in partnership with EY Entrepreneur Of The Year™, Martin explains his plans to keep expanding in his home county of Monaghan.

When asked what the next milestone is for Combilift and for Martin himself, he replied: "We've built this new manufacturing plant, our target is to double the business over the next five years.

"If you meet me in a year's time, my target's still going to be to do double in the next five years, so it's a very simple message."

Listen to the full show here...

"So it's a very simple message. Our employees know it. Our suppliers know it. And our customers know it. 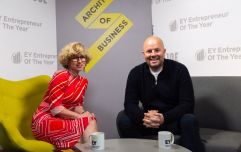 END_OF_DOCUMENT_TOKEN_TO_BE_REPLACED

"That eventually is going to get us to a billion dollar business in the short future."

Martin was asked whether the company could achieve their targets even quicker, perhaps by floating on the stock market and attracting investment from outside, but he insists that their focus is on building technical expertise rather than looking to inject a massive amount of cash into the company's coffers.


popular
Met Éireann issue rainfall warning for 19 counties, with a side of snow
Sinn Féin announce a series of public rallies to take place in five counties
QUIZ: How many of these Derry Girls characters can you name?
QUIZ: Can you name the Sega Mega Drive game from the screenshot?
The JOE Friday Pub Quiz: Week 179
Met Éireann predicting snow this weekend and well into next week
Brendan Gleeson's upcoming performance as Donald Trump is 'scary' and 'too close for comfort'
You may also like
2 months ago
Pat McDonagh talks McDonald's and the challenges of branching into the EU
2 months ago
Triona Mullane on taking the lead: "Complain all you want about the boss..."
2 months ago
"It's my responsibility to enable," Richard Kennedy on letting employees flourish
3 months ago
"We never sat down with a strategy," Jack Dobson on taking a leap of faith
3 months ago
"I won't be a pen pusher," Blue Insurance co-founder Ciaran Mulligan
4 months ago
"Setting up in a recession is the right time to do it," Anne Heraty
Next Page