Think you’d be able to manage this?

Now that he’s retired, Brian O’Driscoll doesn’t have to worry about the gym as much as he used to, but that doesn’t mean he’s forgotten some of the agonising sessions he had to endure during his professional career.

O’Driscoll today posted on his website about the toughest weights session he ever experienced, a session in 2009 with then Leinster strength and conditioning coach Chris Dennis, who’s now working in the AFL with the Geelong Cats.

END_OF_DOCUMENT_TOKEN_TO_BE_REPLACED

As O’Driscoll tells it, he was only back from holidays and as he had a limited window between surgeries on his eye, Dennis decided to ‘beast’ him by making him do a session with a group of players who were three weeks into their pre-season programme. 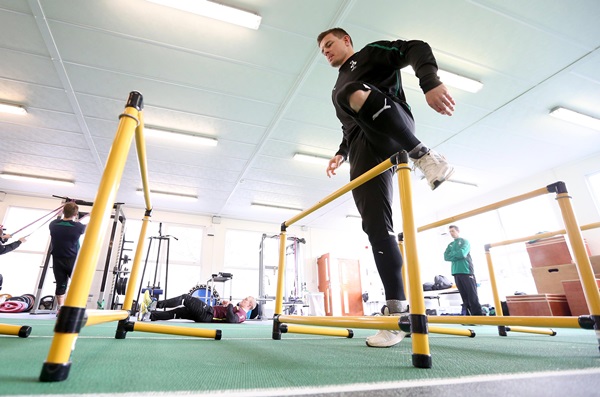 Ten exercises. Each with 100 reps. As quickly as possible.

The session was meant to last 45-50 minutes, but O’Driscoll reckons it took him almost an hour and a half and he freely admits to not finishing every exercise either.

You can read more about O’Driscoll’s memories of the session here, but below is the list of exercises and if you can manage that in one session then you’re some man for one man.

@BrianODriscoll was that your last gym session?

popular
QUIZ: You'll need to be razor-sharp to get 100% in this General Knowledge Quiz
The JOE Friday Pub Quiz: Week 307
The JOE Music Quiz: Week 117
An exciting Irish crime thriller is among the movies on TV tonight
Shooting stars set to light up Ireland's skies this weekend
James May reportedly hospitalised after crashing into wall at 75mph filming new show
Record for hottest August day in Ireland ever has now been broken
You may also like
4 months ago
Scottish Parliament official dies during rugby game in Dublin
5 months ago
Every Guinness fan needs to try these brand new experimental beers
6 months ago
"Samaritans saved my life" - Brent Pope praised for honest interview on Tommy Tiernan Show
1 year ago
Craig Casey and Johnny Sexton combination backed for Italy clash
1 year ago
Defence grows for Billy Burns after one of the roughest days of his rugby career
1 year ago
Major upside to Ireland's Six Nations challenge that should make all the difference
Next Page