Infographic: GAA fans reveal what they would and wouldn’t do for All-Ireland success

How many Mayo fans would give up €5,000 for Sam and what percentage of Laois supporters wouldn’t shave all summer if it meant they’d win the All-Ireland?

For the vast majority of football playing counties, success is a rare, and sometimes non-existent, pleasure. As the Saw Doctors memorably put it ‘to win just once’ is the dream of many fans, and Ulster Bank set out to find just how far fans would go to see their county win the big one; Sam Maguire.

So they polled over 2,000 people and asked them things like ‘would you give up €5,000 to see your team win the All-Ireland?’ And while only 30 per cent of success gorged Kerry fans would, a whopping 64 per cent of Sam-starved Mayo fans would.

END_OF_DOCUMENT_TOKEN_TO_BE_REPLACED

Other nuggets of info unearthed by the survey include the fact that 100 per cent of Laois fans, male and female, would give up shaving for the summer if it meant winning Sam while all Donegal and Longford fans polled would cut short a holiday to watch their team in an All-Ireland.

They also asked which TV pundit they would like to sit beside for the game. No prizes for guessing who won, though we doubt he got many votes from Tyrone… 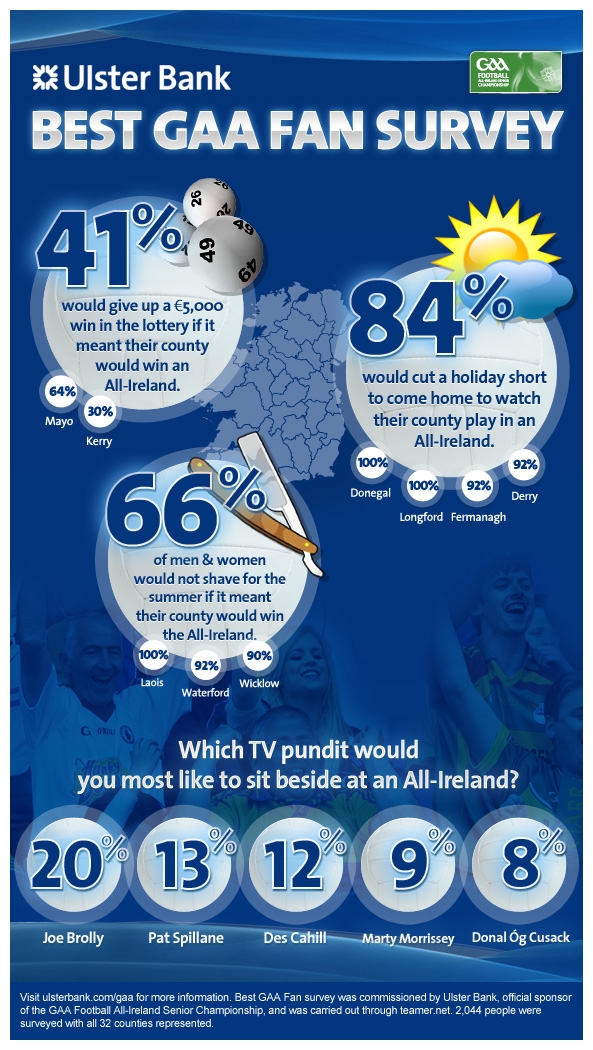 The survey is all part of Ulster Bank's Best Fan initiative, with great prizes for those who get involved. To find out more, just click here.

popular
"It goes off big time!" - The stars of House Of The Dragon tell us what to expect from the new show
Robert Troy apologises and submits seven amendments to correct the record
A very tense '90s action thriller is among the movies on TV tonight
One of 2022’s best hidden-gem comedy series is available to stream
Gardaí warn public of increased incidents of drink spiking in clubs and nightclubs
HSE to set up laboratory at Electric Picnic which will test illegal drugs
You may also like
1 month ago
Looking for a hotel room for the All-Ireland Final weekends? It won't come cheap...
1 month ago
Taoiseach condemns "disturbing" fight at Galway v Armagh game
2 months ago
The 2 Johnnies share unbelievable catfish ordeal affecting over 40 people
3 months ago
Limerick hurler arrested following alleged altercation with Tipperary player in Limerick pub
3 months ago
Woman in her 20s dies after accident during Camogie match
10 months ago
Wicklow GAA to investigate fight after Under 15 match on Saturday
Next Page