Jamie Carragher is returning to Sky Sports next Friday

He is returning for the start of the Premier League season.

Jamie Carragher will return to Sky Sports next weekend after he was suspended from Sky Sports following an incident in March of this year.

The former Liverpool player was suspended by the broadcaster after he spat in the direction of a driver who was mocking Carragher, and inadvertently spat on the driver's 14-year-old daughter. 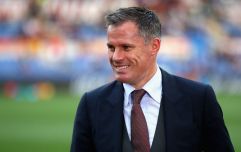 END_OF_DOCUMENT_TOKEN_TO_BE_REPLACED

The incident occurred as Carragher was driving on the motorway in the aftermath of Manchester United’s 2-1 victory over Liverpool last season.

Carragher issued an apology after the incident, saying that he was “totally out of order” and that he had apologised to all of the family personally. While he said that he was goaded three or four times while driving on the motorway, he maintained that there were “no excuses” for his behaviour.

But he will return to television screens next Friday for the opening game of the Premier League.

His TV partner Gary Neville announced the news on Twitter on Wednesday evening, which will delight a number of fans of a man who has been an astute pundit on Sky in recent seasons.

Carragher and Neville's chemistry has brought a new dimension to punditry on Sky Sports, offering both expert analysis and a laugh at the same time.

Manchester United vs Leicester is the opening game of the season, and the coverage will start at 7pm on Friday, 10 August.