What a turn up for the books that would be.

Odds were slashed to 20/1 for Joe Brolly to be the next President of the Republican of Ireland this week, a fact that Ryan Tubridy brought up with the GAA pundit on this evening's Late Late Show.

At first, Brolly said he wasn't thinking of going for the position, before softening up and conceding that he'd consider it if he felt he could make a difference - which, in the business of politics, is quite an affirmative answer. In Ryan Tubridy's words "I don't think so, really is a yes." 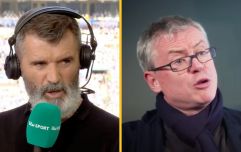 END_OF_DOCUMENT_TOKEN_TO_BE_REPLACED

Among Brolly's passions are cystic fibrosis treatment, and Ireland's need for a new transplant hospital. He also said that his son would like helicopter rides to the games in Croke Park. Eventually he concluded that "it's not something that would be beyond appeal."

Brolly for Prez? Don't forget us when you're on top, big man.

popular
Harvard study reveals how many times men should ejaculate each month to stay healthy
Colin Farrell shouldn't win the Oscar this year
Netflix has just added one of the best sci-fi movies of recent years
Parents left in shock after gorillas start mating in front of kids at zoo
The 50 most iconic songs of all time* have been revealed
Forspoken breaks the golden rule of gaming... and not in a good way
Conor Mcgregor hit by car ‘at full speed’ while cycling
You may also like
1 year ago
The DUP is heading for self-destruction, claims Joe Brolly
1 year ago
Joe Brolly initiates High Court proceedings against RTÉ
1 year ago
Joe Brolly "taken off air" during Claire Byrne Live debate on Monday night
3 years ago
Joe Brolly: "The DUP is about narrow self-interest"
3 years ago
'I was told Joanne Cantwell had lost confidence in my abilities as an analyst'
3 years ago
Here's how to get tickets to Ireland Unfiltered Live with Joe Brolly
Next Page