From Bullseye to Bristow, you couldn’t avoid darts in the 1980s, a decade where the sport ruled the roost on TV.

On September 28 1981 the first episode of the brilliant Bullseye was broadcast. Soon Bully, Jim Bowen and his host of timeless catchphrases had 17 million viewers watching couples from around England nearly, and sometimes actually, win speedboats, caravans or kitchens.

Here’s a look at what you would have watched.

END_OF_DOCUMENT_TOKEN_TO_BE_REPLACED

If you ever needed a reminder of how big darts was in mainstream media in the 1980s, the popularity of Bullseye confirms it. With football only on te box once or twice a year, and with the recession forcing people to stay home more and more, darts stepped in to fill the sporting void and the viewers lapped it up.

The likes of Jockey Wilson, Keith Deller and Bob Anderson become household names but one man towered over them all, the ‘Crafty Cockney’ Eric Bristow.

World No 1 from 1980 until 1987, Bristow won five world titles in that period and was probably as recognisable as any celebrity in the UK during that time.

Events like the World Matchplay, the Butlins Grand Masters, the British Professional Championships and the Winmau Masters appeared annually on the BBC and ITV and that deluge of terrestrial coverage propelled the game to its greatest height in the public consciousness.

But by 1988 the coverage had been cut back to such an extent that only the World Championship was being broadcast live on terrestrial TV.

Though the standard of darts, and the money involved, in the World Championship had never been higher the signs of the upcoming split in the game were there as players grew disgruntled with the way the BDO ran the game. 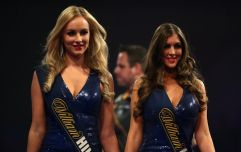 END_OF_DOCUMENT_TOKEN_TO_BE_REPLACED

The other omen for the next decade was a little side project that Bristow took on in the late 1980s, giving a talented youngster from Stoke £10,000 to help his game. That youngster was Phillip Douglas Taylor and he would go on to be the darts phenomenon of the next decade and beyond.

popular
Woman killed in Clare crash named as Peggy Twomey, mother of Marty Morrissey
These are the most generous counties in Ireland, according to GoFundMe
Man in his 70s dies following two vehicle collision in Galway
Amazon Prime Video has quietly added 8 big new movies to its library
Schools and third level institutions to remain closed in counties affected by orange or red weather warnings
A fun action flick with Nicolas Cage is among the movies on TV tonight
Every child in Direct Provision will get a Christmas present this year following fundraiser
You may also like
2 years ago
COMPETITION: Win a VIP package for the BoyleSports World Grand Prix Final
3 years ago
Classic '80s game show Bullseye looks set to make a huge comeback with a brand new presenter
3 years ago
World Darts Championship newcomer Rob Cross demolishes Phil 'The Power' Taylor
4 years ago
WATCH: Fan causes havoc as he invades stage during World Darts final
5 years ago
VIDEO: A few pints didn't stop this darts beginner from nailing an amazing trick shot in a Mayo pub
5 years ago
PIC: These Irish girls from Mayo were caught holding a very bold sign at the darts
Next Page