"It’s something that meant a huge amount to Callum and to his family."

A classy Johnny Sexton's gesture after the recent win over Wales shows the bond that often exists between rugby players.

According to House of Rugby Ireland host, and Ulster and Ireland out-half, Ian Madigan, Callum Sheedy's father, Philip, is from Kildare and though he played underage rugby for Ireland, he committed to playing Test rugby for Wales.

Following Ireland's 32-9 win over Wales, during which Sheedy made his debut, Sexton went into the 'Away' dressing room and approached the young outhalf.

LISTEN to the full Sexton story (from 43:00 below) and hear how a French rugby legend made Ian Madigan's day after his Ireland debut. 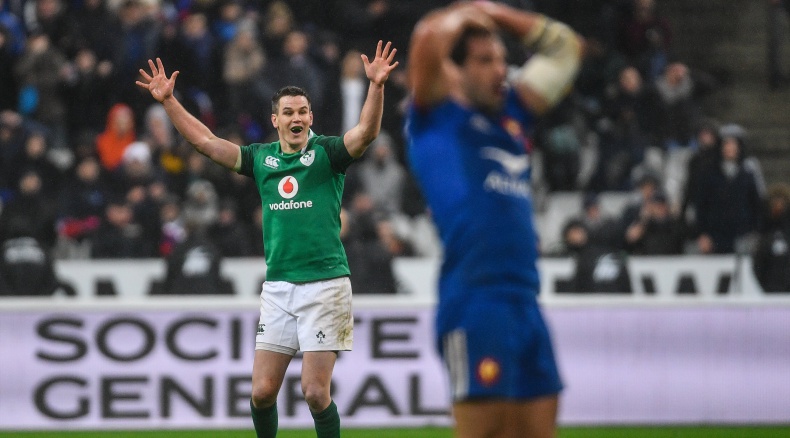 END_OF_DOCUMENT_TOKEN_TO_BE_REPLACED

When you consider Sexton came off injured after only 27 minutes of that game, to have the presence of mind to make the day extra special for Sheedy, his opponent, is really saying something about the Ireland captain.

There was a lot more besides on the latest House of Rugby Ireland episode, including:

popular
Harvard study reveals how many times men should ejaculate each month to stay healthy
Parents left in shock after gorillas start mating in front of kids at zoo
Colin Farrell shouldn't win the Oscar this year
Conor Mcgregor hit by car ‘at full speed’ while cycling
Close call as Paul McCartney tries to pose on Abbey Road crossing
The JOE Friday Pub Quiz: Week 331
Netflix has just added one of the best sci-fi movies of recent years
You may also like
4 months ago
Iconic rugby commentator Eddie Butler dies aged 65
10 months ago
Scottish Parliament official dies during rugby game in Dublin
11 months ago
Every Guinness fan needs to try these brand new experimental beers
11 months ago
"Samaritans saved my life" - Brent Pope praised for honest interview on Tommy Tiernan Show
1 year ago
QUIZ: How well do you know these famous Ireland players?
1 year ago
"You want to prove them wrong, even if they're not telling the right story" - Conor Murray
Next Page