A touch of class.

Leinster have announced that they will honour a very special supporter at the Guinness PRO12 game against Connacht this Saturday in the RDS Arena, and they've asked for the help of their supporters in doing the same.

Liam Hagan, from Threemilehouse in Monaghan, had been nominated by DEBRA Ireland, one of Leinster’s two charity partners, to lead out the team as one of two mascots before match against Pat Lam's side. In a tragic turn of events, Liam passed away only a few weeks ago. Liam, a lifelong Leinster fan, was born with a severe form of EB (epidermolysis bullosa) a genetic disease that causes skin, both inside and out, to blister at the slightest touch.

END_OF_DOCUMENT_TOKEN_TO_BE_REPLACED

His place as mascot will now be taken by his best friend and cousin Adam McCormick, also from Monaghan, who will now lead out the team in Liam’s honour and Leinster have asked all supporters to acknowledge Liam and his courageous fight at the game.

Speaking at Leinster HQ today,  Sean O’Brien said, “Liam is the toughest little guy we have ever come across and it is very sad that he won’t be with us on Saturday but we will make sure that Adam has a great day and we will remember Liam and our thoughts are very much with his family. It would be great if both sets of supporters acknowledged Liam and supported DEBRA Ireland and wore their tattoos at the game.” 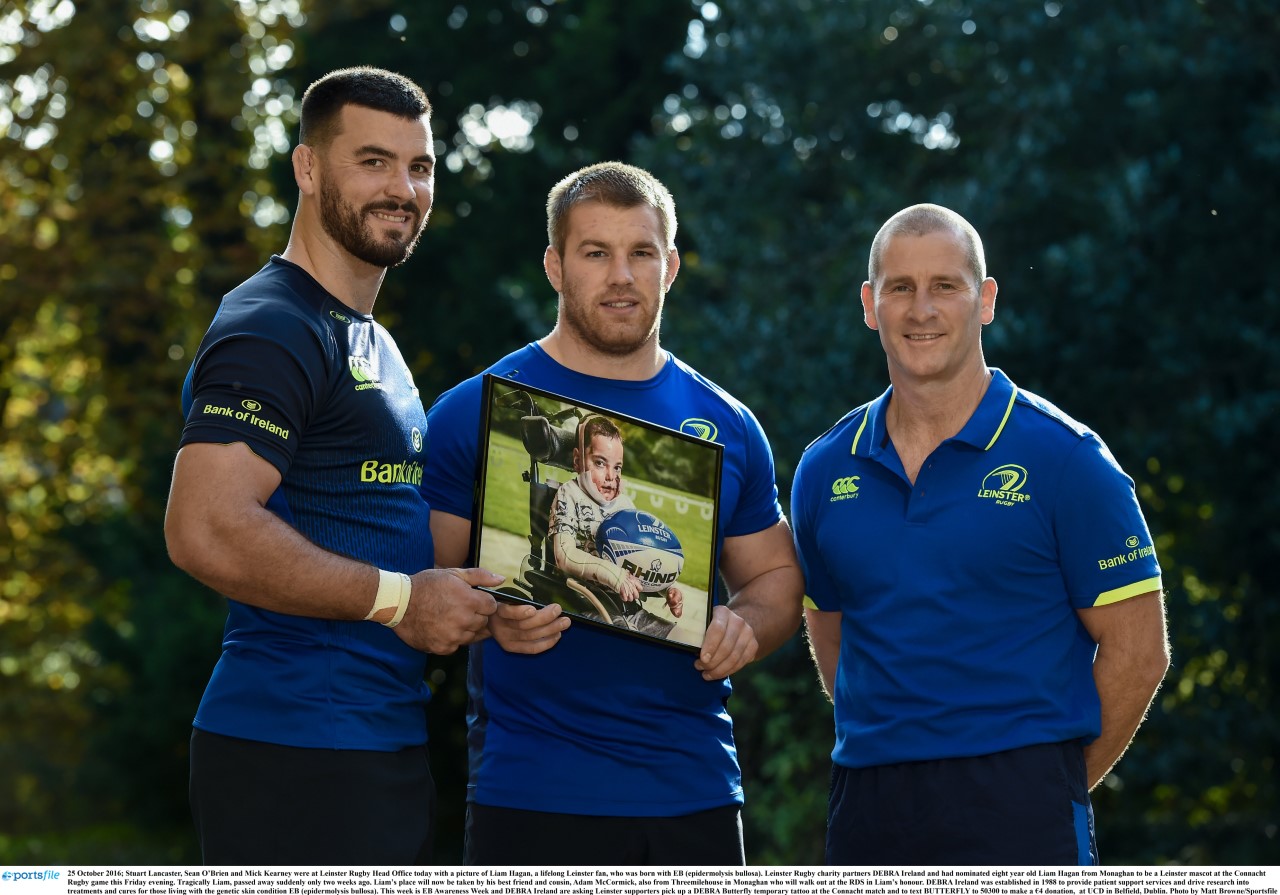 DEBRA Ireland will be in attendance at the game and will be handing out butterfly tattoos and are asking supporters to wear the butterfly in a show of support for Liam and other families fighting EB.

END_OF_DOCUMENT_TOKEN_TO_BE_REPLACED

In addition Leinster announced that SKY Sports, the broadcasters of the game, will scan the crowd at half time to pick out supporters wearing their butterfly tattoos and one lucky supporter will win two Leinster Rugby season tickets for next season as well as other spot prizes on the night.

Speaking on behalf of DEBRA Ireland, Judith Gilsenan said, “This is EB Awareness Week and Liam, being a rugby nut despite the pain he felt every time he touched a ball, was the obvious choice as mascot for Saturday’s match. 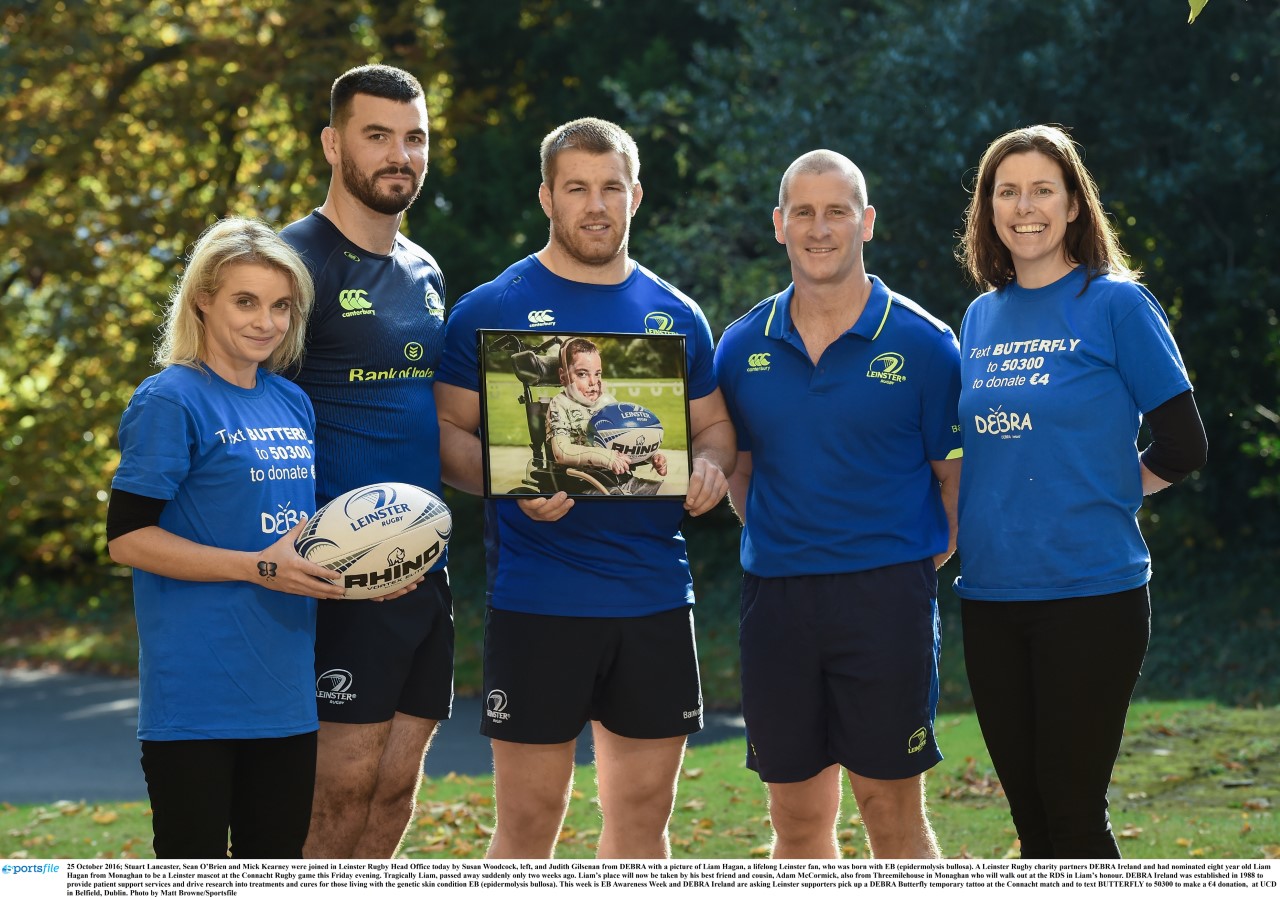 “EB is often described as ‘butterfly skin’ because the skin is as fragile as a butterfly’s wing, and just as easily damaged. Saturday is still Liam’s day and we are asking people all over the country to wear a butterfly temporary tattoo for him and all families fighting the battle with EB.

END_OF_DOCUMENT_TOKEN_TO_BE_REPLACED

“Before the Connacht match in the RDS, we are asking fans of both sides to strike up a round of applause to mark Liam’s courageous battle. Joining in this celebration of Liam’s life and his unbelievable bravery would mean the world to his family.”

Liam, whose big wish was to one day make a trip to Disneyland, lived with his mum Gráinne and his grandparents Paul and Kathleen and they will be guests of Leinster Rugby at the game on Saturday.

Anyone wishing to support DEBRA Ireland during #EBAwarenessWeek is asked to text BUTTERFLY to 50300 to donate €4 and DEBRA Ireland will receive a minimum of €3.25 from every donation.