Ole Gunnar Solskjaer believes in the traditions of Manchester United.

But Ole Gunnar Solskjaer probably needs to reinvent the traditions of Manchester United if the club is to progress this season.

END_OF_DOCUMENT_TOKEN_TO_BE_REPLACED

This is exactly what Solskjaer said would happen but that prescience doesn't necessarily mean he is the progressive visionary Manchester United need.

Solskjaer is a problem Manchester United will have to solve at some point, but he is only one of many they have to fix in a world which has been turned upside down since the days Solskjaer harks back to.

When they equalised late on Saturday, those who had grown up in the Ferguson era expected only one result. But there is a new era now and there was a different result.

Something might have happened in 1999 that Solskjaer can fall back on right now but the defeat to Palace illustrated some of the problems at the club.

On The Football Spin, Paddy McKenna and Dion Fanning discuss Manchester United's prospects with Reuben Pinder and wonder how they get out of the season they've been having every year since Alex Ferguson retired. 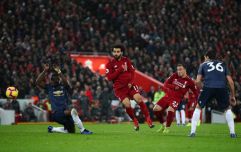 QUIZ: Test your knowledge of the Liverpool-Manchester United rivalry

END_OF_DOCUMENT_TOKEN_TO_BE_REPLACED

Palace, meanwhile, look like being predictably unpredictable and there's a chance to look back on the other important weekend results, including Liverpool's defeat of Arsenal and why David Luiz made things easy for a player who looks like he won't need any assistance this year.

There's also discussion of Ben Stokes and why video assistance doesn't deliver the same problems in cricket as well as an update on the latest Sunday Times stories on the FAI.

It's all part of The Football Spin.

popular
Woman dies from hypothermia after telling doctor she 'couldn't afford heating'
An incredibly fun action blockbuster is among the movies on TV tonight
Here is a list of every Bank Holiday in Ireland in 2023
Nicola Bulley's phone found by the river 'could be a decoy', diving expert suggests
QUIZ: We bet you can't get full marks in this extremely frustrating geography quiz
The Last Of Us Episode Five will premiere days earlier in Ireland and UK
One of the best crime thrillers ever is among the movies on TV tonight
You may also like
8 months ago
BBC trainee accidentally posts message mocking Man United live on TV
1 year ago
COMPETITION: WIN a copy of Eric Cantona's new Manchester United documentary, The United Way, on DVD
1 year ago
Manchester United documentary written by Eric Cantona available to watch at home in Ireland this May
2 years ago
Marcus Rashford launches book club to help kids experience 'escapism' of reading
2 years ago
Paul Pogba releases powerful statement in response to 'fake news' from The Sun
2 years ago
The JOE Pub Quiz: Week 214
Next Page