The build-up to the meeting of Mayo and Donegal keeps getting spicier and a Limerick Leader headline that fails to inspire.

From the post-match comments of Jim McGuinness before the draw was made on Saturday, to the Mayo press night on Sunday, to the to-and-fro between the teams on Twitter since, there is a real edge to the big quarter-final at Croke Park on Sunday.

Any meeting of past All-Ireland finalists the following year usually is but this enmity is brewing up very nicely indeed, and may go on for a few years yet.

END_OF_DOCUMENT_TOKEN_TO_BE_REPLACED

The latest oil on the fire comes from Donegal legend Declan Bonner. In an interview in the Irish Examiner, the 1992 All-Ireland winner reckons that James Horan has made a mistake by talking about Donegal’s ‘physicality’.

"It probably stems back to last season when James Horan was of the opinion that Mayo didn’t get the credit they deserved," he said. "At the end of the day, you do your talking on the park.

"He’s brewed up another storm now and there’s no love lost between him and Jim McGuinness. But it’s foolish on James Horan’s part.

"Going into the Ulster final, Donegal were missing that bit of hunger but after what Horan said I’d say their gander will definitely be up for Sunday.

END_OF_DOCUMENT_TOKEN_TO_BE_REPLACED

To be honest, we reckon that Donegal would be pretty up for this game anyway but if they needed an extra push, this might just help.

Interestingly, Bonner has a different view regarding McGuinness’s comments, claiming his mention of players being targeted was “mostly tongue-in-cheek” according to the flame-haired former forward.

Guess we shouldn't be surprised...

Thinking of snappy headline scan be a tiring business and somebody in the Limerick Leader today just wasn’t in the mood, instead deploying the most basic GAA banner we’ve ever seen. 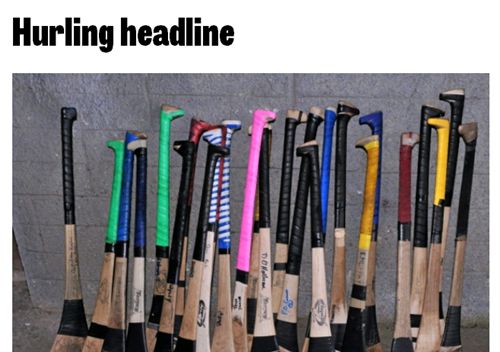 Anyway, the preview of the Limerick SHC is worth a read, so click here to do so, just ignore the top of the article.

popular
The JOE Friday Pub Quiz: Week 308
Pilots fly over destination airport at 37,000 feet because they were both sleeping
Netflix has just added 23 very big movies to its library
Multiple fatalities after planes collide mid-air over California airport
Here's how to make €9-11 on Revolut in just a few minutes
Passenger plane dropped 1,200 feet in a minute without pilots noticing
One of 2022’s best hidden-gem comedy series is available to stream
You may also like
1 month ago
Looking for a hotel room for the All-Ireland Final weekends? It won't come cheap...
1 month ago
Taoiseach condemns "disturbing" fight at Galway v Armagh game
2 months ago
The 2 Johnnies share unbelievable catfish ordeal affecting over 40 people
3 months ago
Limerick hurler arrested following alleged altercation with Tipperary player in Limerick pub
3 months ago
Woman in her 20s dies after accident during Camogie match
10 months ago
Wicklow GAA to investigate fight after Under 15 match on Saturday
Next Page