Munster were excellent in securing a home Heineken Cup quarter-final with a win over Edinburgh today and fittingly, it was their captain who ensured that it was delivered.

Edinburgh might not have provided the most fearsome of opposition but Munster still had to win and win well in Thomond Park this afternoon to make sure of a home quarter-final and they did in some style with a 32 point victory over a side that shocked them earlier on in the season.

END_OF_DOCUMENT_TOKEN_TO_BE_REPLACED

After Edinburgh opened the scoring with a penalty, James Coughlan touched down for an early try to settle things in Limerick and the five-pointers flowed easily afterwards with Johne Murphy, Conor Murray, Simon Zebo and Felix Jones all getting in on the act as well as captain Peter O’Mahony, who looked pretty chuffed to have scored the bonus-point try midway through the second half. 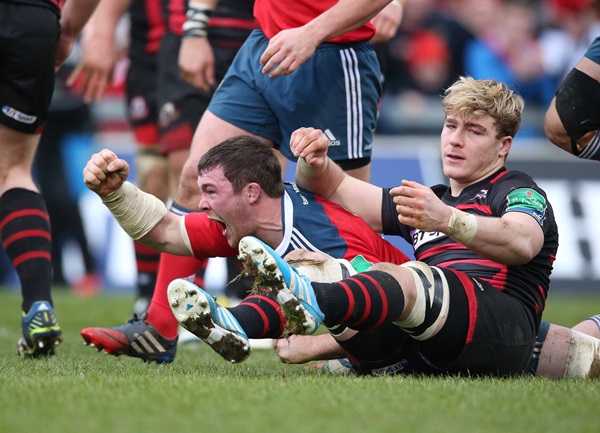 Ian Keatley kicked four conversions on what was a hugely satisfying day at Thomond Park, with an injury to Keith Earls that forced his withdrawal in the first half the only thing spoiling the feelgood factor around the men in red.

The exact identity of Munster’s opponents will remain up in the air until the conclusion of Clermont’s encounter with Racing Metro a little later on, but there remains a possibility of a mouth-watering Munster v Leinster quarter-final in Thomond Park in early April and who (apart from incredibly nervous fans of both sides of course) wouldn’t want to see that?

popular
These are the 27 new Marvel movies and shows coming in 2021 and beyond
The hardest Line Of Duty quiz you'll ever take
QUIZ: Can you score top marks in this random European trivia quiz?
Everything you need to know about the Indian variant of Covid-19: How the vaccine will affect it and its presence in Ireland
The JOE Movie Quiz: Week 98
Morrissey calls The Simpsons "racist" after showing him with his "belly hanging out"
The 50 most iconic songs of all time* have been revealed
You may also like
1 month ago
Craig Casey and Johnny Sexton combination backed for Italy clash
2 months ago
Defence grows for Billy Burns after one of the roughest days of his rugby career
2 months ago
Major upside to Ireland's Six Nations challenge that should make all the difference
2 months ago
John Cooney comes to defence of JJ Hanrahan after kicking criticism
3 months ago
Cardiff conversation that proved Paul O'Connell always put the team first
3 months ago
Ian Keatley on Ronan O'Gara's deadpan advice and his most treasured Munster jersey
Next Page