Sports Illustrated have ranked the world's 50 fittest athletes, and there are some odd inclusions

No arguments at the top, but are Micah Richards and Nani fitter than Chris Froome?

Any list like this is going to be very tricky to put together. It is almost impossible to compare NFL players and marathon runners, soccer players and boxers, so hats off to SI for giving it a try.

In an attempt to balance it out, the magazine used four categories (speed, strength, agility and endurance) and gave everyone a mark out of 10 in each. The highest total tops the list, and it belongs to LeBron James, who gets a perfect score across the board. No beef there, the man is a marvel.

Second is another freakish athlete, Cristiano Ronaldo, who loses out to LeBron only on strength, while third is Usain Bolt.

While we could quibble about some of those, it is further down the list that things get a bit odd. The second soccer player on the list, so the second fittest on the planet after Ronaldo, is Micah Richards at 23. The Man City man is in good nick, but is he really second only to Ronaldo in the world's biggest game? 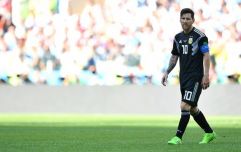 END_OF_DOCUMENT_TOKEN_TO_BE_REPLACED

Spain's Sergio Ramos is in at 29, but it is the appearance of Nani, at 34, that baffles us. Perhaps his US profile is bigger than we thought. It must be considering he sits so far ahead of someone like Tour de France winner last year. Chris Froome, who is a lowly 45.

No Irish make the list - which you can check out in full here - so we might just have to put one together ourselves. Do send us you suggestions please.