If Roy Keane is right about England, then we're all a bunch of eejits

You could tell that Roy Keane had been waiting for this.

Like many of us in Ireland, Keane had been waiting to see England outrun, outgunned — and out of the World Cup.

Luka Modric and the Hrvatski golden generation made England's players look their age last night, and football neglected to come home once more. Make that 52 years of hurt, Frank.

END_OF_DOCUMENT_TOKEN_TO_BE_REPLACED

And Roy Keane, who has spent his World Cup sandwiched between Gary Neville and Lee Dixon and Ian Wright, had been waiting.

"Before the game, and yesterday and today, they were talking about England, the whole talk about the final, the final, France," he said, clearly savouring it. "You have to focus just on one game and everyone was talking about the final and football's coming home. I don't mind you being happy, but you're getting carried away."

The icy glare, the clenched jaw, the gritted teeth. Like a grizzled Arctic explorer who has been frozen in time since people greeted each other with a studs-up lunge. Classic Roy Keane.

"I was right. You were planning the final, where the parades were. You need a reality check. Get excited when they get to the final, this was the semi-final! You're talking about the final, you're a grown man, you played the game."

Of course, it's a real challenge for any Irish person to look past the obnoxiousness that was Ian Wright responding by mocking Keane's Cork accent, but when it comes down to it... Keane is flat out wrong. We're just pretending he's not.

We tell ourselves he's right. Last night, I saw it in action. I wrote about how Roy Keane went full Roy Keane on the England result and I watched 30,000 people click it in 75 minutes. It had 1,000 likes on Facebook in the same time, and hundreds of shares. Dead right! Bang on! Keano putting them in their place again!

But he's fooled us.

END_OF_DOCUMENT_TOKEN_TO_BE_REPLACED

After all, Roy Keane isn't just a pundit. He's also the assistant manager of Ireland.

If celebrating a semi-final run is something to be embarrassed about then what does that make a 5-1 play-off defeat to Denmark on your own turf? If John Stones and Kyle Walker can be pilloried, then what is there to say about Glenn Whelan and Shane Long?

If Gareth Southgate hasn't done a phenomenal job, then how can Roy Keane think that he and Martin O'Neill's positions are still tenable?

If England fans, players and pundits can't celebrate this — then what hope is there for us?

And before anyone leaps in with the argument that the expectations should be different for England because it's a bigger country, I'd remind you that they've just been dumped out of the tournament by the nation of Croatia. A country of 4.1 million people that didn't even exist 28 years ago.

END_OF_DOCUMENT_TOKEN_TO_BE_REPLACED

For England to have reached this semi-final with a group of players that have virtually no World Cup experience, and a manager who ended up in the job by accident, is a huge achievement. It's the furthest they've gotten in 28 years. David Beckham couldn't take them there. Steven Gerrard couldn't drag them there. Wayne Rooney, Frank Lampard, Alan Shearer, John Terry, Rio Ferdinand, Paul Scholes — not a one of them can match what Harry Kane, Dele Alli, Harry Maguire, Kieran Trippier and Jordan Pickford have achieved at the first time of asking.

The England fans deserved every minute of their excitement. Were they supposed to reserve their chanting until the final whistle of the final match? And even then, only if they'd won? They weren't supposed to think of where a winning parade might be held?

But we can't accept that Roy is wrong. We let the myth continue in the hopes that one day we'll wake up and it'll be 2002 again, and he'll be leading us out against Spain in the round of 16 and we'll be able to say: "We stood by him the whole time."

It's absurd that we still gaslight ourselves into thinking that it's even a real debate.

If we really agree with Keane that the Brits had no right to lose the run of themselves throughout their dazzling World Cup run, then how do we justify idolising Roy Keane?

If the England fans are blinkered, far too wrapped up in the minuscule achievements of their team... What does it say about us that we idolise a man whose finest moments in an Ireland jersey came in the bloody qualifiers? 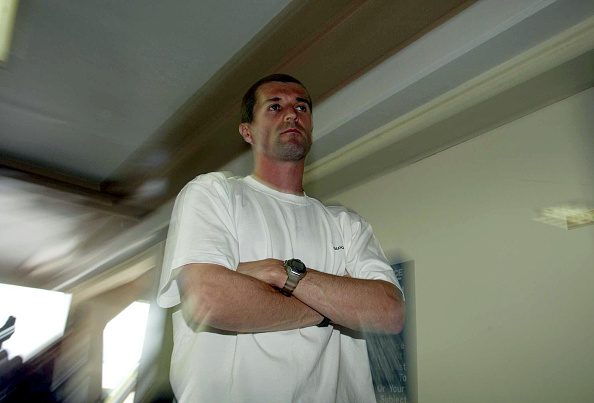 We were excited to beat the Netherlands 1-0 in Lansdowne Road. To hold Portugal to a draw. To scrape past Iran in the play-offs. And to treat the players who got us there as heroes. Because that's how it's supposed to be.

We sing "You'll Never Beat the Irish". It probably makes Roy Keane want to hurl his Diadoras into the stand, but we're not going to stop.

Ray Houghton is a national hero, but by Keane's metric, all he ever really did was score against England. Packie Bonner? Just a good goalkeeper. If Roy Keane had to assess his own Ireland career, "at the end of the day like", he'd be forced to admit that it was nothing to get excited about.

And it kills me to say that. It feels like treason. But if it is, it's treason against a king who doesn't care for his people. He told us as much after our embarrassing exit in Euro 2012 — "I’m not too happy with all that nonsense. To praise the supporters for sake of it. Let’s change that attitude towards Irish supporters. It’s just nonsense from players speaking after the games about how great the supporters are."

Because of his job, Keane can't talk about the Ireland fans that way anymore, but his comments last night prove that he still believes it.

We want to love Keane because he's a hard man. Because you'd never see him crying on the pitch. Because he still talks like a winner, even though it's been some time since he won anything.

But if Roy Keane truly is right about football, then we're all a bunch of fucking eejits.

popular
The JOE Friday Pub Quiz: Week 272
Irish people among the heaviest drinkers in the world, new survey finds
One of the best Irish movies ever made has just been added to Netflix
8 gorgeous Irish Christmas markets you need to visit this winter
One of Keanu Reeves' best movies has just been added to Netflix
Here's the lineup for tonight's Graham Norton Show
NPHET considers more restrictions including on hospitality and home visits
You may also like
1 day ago
One of 2021's most overlooked movies and 7 more movies and shows to watch this week
1 day ago
COMPETITION: Just in time for Christmas, we've got a €200 One4All voucher to give away!
2 days ago
Game of Thrones Studio Tour will open in Ireland in February 2022
4 days ago
8 great new additions to Amazon Prime Video in December
4 days ago
"It has a Beauty & The Beast aspect" - Kristofer Hivju on his role in The Witcher Season 2
1 week ago
Marvel's answer to Die Hard and 7 more movies and shows to watch this week
Next Page