When it comes to Conor McGregor, who knows what to believe?

McGregor shocked the world by announcing his retirement from "mixed martial art" in the early hours of Tuesday morning but it should be remembered that this is not the first time that the Irishman has claimed that he is hanging up his gloves.

'The Notorious' thanked us all for the cheese when he announced that he was walking way from MMA in 2016 but four months later, he was back in the Octagon.

I have decided to retire young.
Thanks for the cheese.
Catch ya's later.

END_OF_DOCUMENT_TOKEN_TO_BE_REPLACED

McGregor's first announcement was no more than a power play after he was criticised by UFC President Dana White for his refusal to leave his training camp in Iceland to attend a press conference for his rematch with Nate Diaz.

In the end, McGregor got his way.

END_OF_DOCUMENT_TOKEN_TO_BE_REPLACED

The latest McGregor announcement is curious for a number of reasons, the first being that it arrived just hours after an interview on The Tonight Show with Jimmy Fallon aired in the United States.

Granted, that interview was recorded last week but the fact that McGregor chose to make his big announcement while he was likely trending on social media and had just proven for the umpteenth time that he is one of few superstars on the UFC roster who transcends the sport lets you know that he timed this perfectly.

If he really is walking away then he ensured the most eyes possible saw his announcement, which came on his terms via his Twitter. If he's not walking away and this is just another ploy to get what he wants in the UFC then the fact it came after an appearance on The Tonight Show might be a way to stick it to Dana White by saying, essentially, "don't forget that this is how big I am for this sport and this organisation.'

END_OF_DOCUMENT_TOKEN_TO_BE_REPLACED

The content of McGregor's chat with Fallon may also be telling because the former UFC featherweight and lightweight champion revealed that he was "in talks for July. There’s a lot of politics going on, it’s a mad game, the fight game."

The politics referenced by McGregor is likely the dispute over whether he would headline a card or be involved in a co-main event, the latter scenario requiring an equity stake in the company according to McGregor himself.

McGregor is a smarter businessman than most and he is more than financially stable enough to hang up his gloves now. 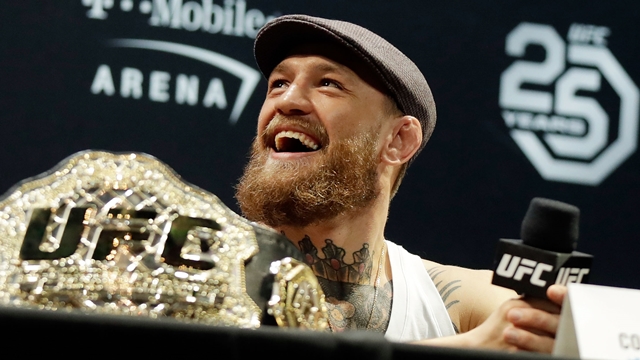 But he is also steps ahead when it comes to the chess-like movement of negotiations in the fight game so it remains entirely likely that he has just made his value very clear to Dana White, positioning himself perfectly either to demand a main event slot or some shares in the UFC.

If it is all just a game of chicken for McGregor, White doesn't seem to be budging.

"He has the money to retire and his whiskey is KILLIN it," White told Yahoo Sports. "It totally makes sense. If I was him, I would retire, too. He’s retiring from fighting, not from working. The whiskey will keep him busy and I’m sure he has other things he’s working on. He has been so fun to watch!!! He has accomplished incredible things in this sport. I am so happy for him and I look forward to seeing him be as successful outside of the octagon as he was in it."

How this will all play out will prove fascinating but in business just as he was in fighting, McGregor knows how to keep all eyes on him.

popular
Spielberg's best movie is among the movies on TV tonight
Missing mother's children 'cried their eyes out' after they were told 'mummy's lost'
Steve-O says he cannot save 'dying' Bam Margera in emotional online post
Netflix has just added one of the funniest shows of the last 10 years
One of the best thrillers of all time is among the movies on TV tonight
Couple decide to live on cruise ship permanently after finding it's cheaper than paying mortgage
Dublin train station finally set to open after being built 14 years ago
You may also like
3 months ago
Conor McGregor slammed for Halloween photo of mum in 'black face'
5 months ago
Conor McGregor to make film acting debut in Road House remake
2 years ago
Conor McGregor responds to Paschal Donohoe’s calls to encourage social distancing amongst Irish public
3 years ago
"I was in the wrong" - Conor McGregor apologises over incident in Dublin pub
3 years ago
Charges dropped in Conor McGregor phone-smashing case
3 years ago
WATCH: New footage released of Conor McGregor allegedly smashing fan's phone in Miami
Next Page