On Tuesday, we reported that the Tour de France was brought to a halt due to the fact protestors had interrupted the race.

A group of farmers had pushed barrels of hay on to the tracks, and were then dealt with by police who sprayed something into their eyes. The spray inadvertently got into the eyes of the cyclists, and resulted in the race having to be stopped. 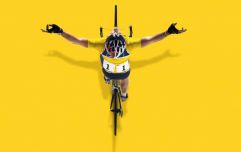 END_OF_DOCUMENT_TOKEN_TO_BE_REPLACED

It got back underway following the incident at the 16th stage of the race.

But that isn't the most harrowing image of the race so far...

Belgian cyclist Philippe Gilbert posted an image online of his leg following the race, and we mean it when we say it is truly disgusting.

We are warning you now, if you're in any way squeamish - look away now.

Okay, here it is.

When you have a broken knee cap and decide to keep going for another 60km 🤕 pic.twitter.com/cGoidtQH3w 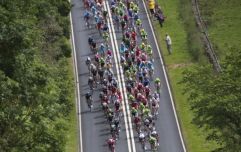 Pic: The Mayo 4 Sam brigade have finally made it to the Tour de France

END_OF_DOCUMENT_TOKEN_TO_BE_REPLACED

Gilbert posted the image on his own Twitter page, along with the caption: "When you have a broken knee cap and decide to keep going for another 60km".

What a warrior. You can see his left kneecap about ten times the size of his right one.

Before that, Gilbert posted a video online explaining why he would be unable to finish the race.

Thank you all for the support after yesterday’s crash. I have done everything I could to continue in @LeTour, but unfortunately it’s not longer possible with a fracture of the patella. As always I will come back stonger! #TourDePhil #TDF2018 pic.twitter.com/FVobfmxhfz

He told his following that: "As always I will come back stronger!"

Based on his determination, we believe him...

popular
QUIZ: Can you name all the counties in Ireland without the letter 'E'?
Nearly 100 flights delayed at Dublin Airport on Monday
QUIZ: Can you get top marks in this short but tricky Irish geography quiz?
WhatsApp introduces way to choose who can and can't see you're online
The JOE Friday Pub Quiz: Week 306
RTÉ tries to solve Michael Collins murder in new documentary
Netflix has just added an incredibly tense 97-minute thriller
You may also like
4 months ago
'Drive to Survive but for bikes' is coming to Netflix
1 year ago
Woman arrested over Tour de France's worst-ever crash
1 year ago
Tour de France spectator to be sued after cardboard sign causes crash
4 years ago
The Tour de France was halted following a tear gas incident
7 years ago
Police at Tour de France open fire after motorist tries to run them over
7 years ago
Video: This man tries, and fails, to eat as much as a Tour de France rider
Next Page